On March 28, 1973, University officials stood on the floor of an empty Olympic-size pool and proudly announced the opening of a new state-of-the-art swim center. The pool contained a long- and short-course swimming area, two separate water polo courts, and an underwater window allowing a coach to observe swimmers. The building featured two million multicolored floor tiles, seating for 1,500, and a scoreboard that could display swimmers’ results in real time, a novelty in the early 1970s. But the pride of the architect was the ceiling, a multi-peaked structure supported by long wooden beams that gave the feeling of being inside a vast circus tent. “It’s like a dream finally come true,” Joe Watmough, that year’s swimming coach, said at the March press conference. 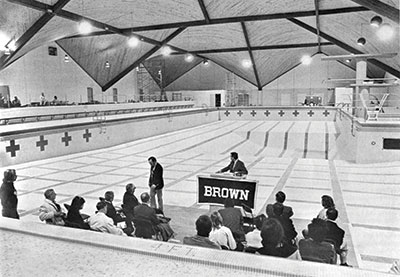 The March 28, 1973, press conference that opened the Smith Swim Center.
Almost thirty years later—a short time span for a Brown building—the Smith Swim Center is slated to be torn down. This winter it was declared unsafe to inhabit and shuttered for good. In May, the Corporation approved construction of a new $25 million swim center, scheduled to open in 2010. Until then, Brown’s aquatics teams will use a temporary pool in the parking lot behind the Olney-Margolies Athletic Center (OMAC). Russell C. Carey ’91, ’06 AM, interim vice-president for campus life and student services, says Brown will try to recoup some of the costs of erecting the temporary facility by selling it off to another institution once it is no longer needed.

Why was the swim center’s decline so swift? Vice President for Facilities Management Stephen Maiorisi, says that, for all the building’s architectural delights, it lacked one crucial feature—a dehumidification system. As a result, he says, moisture from the pool rose to the ceiling and caused the wooden beams to rot. “At this point, we don’t know why it [a dehumidification system] was left out,” Maiorisi says.

Brown officials first discovered the rot during the 1990s, according to Maiorisi; visible damage was repaired by shoring up the beams with steel. Then, last summer, a fire broke out while workmen were renovating the locker rooms. Firefighters noticed that the flames had exposed more decay than was previously observed. “The beams were rotting from the inside,” Maiorisi says. “You would not have known there was a problem by looking at the beams.”

Late last fall Brown asked the building’s architect, Daniel Tully, to come to Providence and examine the beams. He determined that they had lost enough strength to make closing the building necessary. University officials estimated that repairs would cost about $25 million, making them prohibitively expensive. Because construction on a new fitness center adjacent to the swimming pool was due to begin soon, Maiorisi says, building a new swim center as part of the fitness center project made sense.

So who is responsible for the Smith Swim Center’s demise? Tully, whose architectural firm is based in Santa Fe, New Mexico, says he has designed “dozens and dozens of other pools, and none of them ever developed problems like Brown’s.”

The Smith Swim Center, like many of Tully’s other projects, features a roof design he patented and called “hyperbolic paraboloid” after the similarly named geometric figure. From a distance, the shape looks something like a bird in flight with its wings outstretched and uplifted. The tips of the wings become peaks in the roof.

When asked who bore responsibility, Tully said, “Let’s just assume you drive a Ford and you’ve been driving Fords for twenty years. Every two years you turn it in (for a new one) because you forgot to change the oil. That doesn’t mean the Ford isn’t a good car. It requires maintenance. If you have an oil leak you fix it. If you have a flat tire, you replace it.”

Asked next if he was implying that Brown didn’t maintain the facility well enough to protect it, he declined to elaborate. “What I spoke to you about was cars,” he says.

Maiorisi rejects Tully’s analogy, saying, “I don’t know what maintenance we could have done to prevent this from happening.” Russell Carey declined to reveal whether Brown planned any legal action against Tully to recoup any costs.