Expectations are high on Warner Roof this fall, as former player and assistant coach Tara Harrington ’94 hopes to lead a loaded field hockey squad to the top of the Ivy League in her first year as head coach. Harrington won Ivy titles as a player in 1991 and as an assistant in 1999, and she now succeeds Carolan Norris, who has moved into a new role in athletics administration, as head coach. 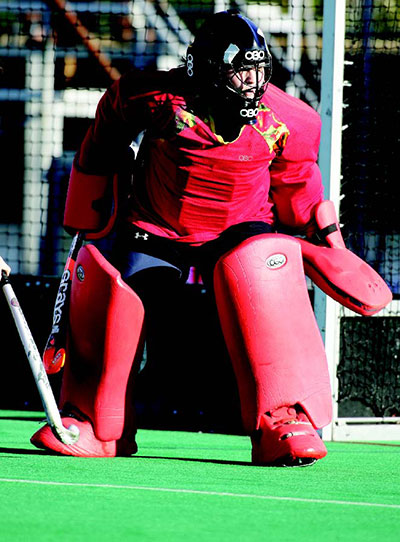 Kristen Hodavance ’08 may be the league’s best goalkeeper.
David Silverman

Harrington is fortunate to inherit a team that returns Andrea Posa ’08, the Ivy League’s leading scorer from a year ago, as well as Kristen Hodavance ’08, who is arguably the conference’s top goalkeeper. Hodavance led the Ivies in both goals-against average and shutouts in 2006. That powerful offense-defense combination should make the Bears a potent force in the Ivy League.

“I think we have the potential to do great things this year,” Harrington says. “We’re going in the right direction.”

Sandhya Dhir ’08 and Nora Malgieri ’10 should ease the scoring load up front. In the midfield, Ani Kazarian ’08 and Sara Eaton ’09 are both experienced returnees who started every game last season. The backfield includes two smart defenders who make good decisions: Katie Auriemma ’08, a Phi Beta Kappa honoree; and Victoria Sacco ’09.

Once again Princeton is the team to beat. This year the Bears’ team motto is “Eight years in the making.” It has been eight years since the team’s last championship run, and the pieces could be in place for another shot at glory.