If there were any doubt that 1960s radical and one-time FBI fugitive Angela Davis had lost any of her fight, she quickly put it to rest. "I want to talk to you about some somewhat unfamiliar forms of racism and organizing struggles against those forms of racism," the sixty-four-year-old Davis told the overflow audience assembled in the Salomon Center for this year's Martin Luther King Jr. Lecture in early February. She then said racism "is no less overt" today than it was forty or fifty years ago and later called for an overhaul of the prison system. 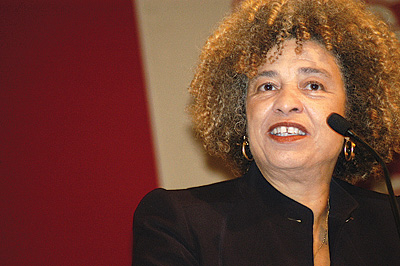 Frank Mullin
Davis wants to abolish the American prison system.
But the real target for Davis, a professor of the history of consciousness and feminist studies at the UC Santa Cruz, was what she called "neo-liberalism." This, she said, was the ideology of well-meaning liberals who mistake feeling good for a serious and potentially disturbing analysis of race in this country. For instance, she said neo-liberalism had turned Black History Month into a celebration of "individuals who have managed to overcome the racial barriers of the past" and into a glorification of various legal battles that gave African Americans new rights or triumphed over social injustice. True to her Marxist roots, she said the civil rights movement happened because "ordinary people became aware of themselves as potential agents of social change." A new "collective consciousness" among blacks was the real reason the 1960s became a time of such immense social change, she said.

Davis also said neo-liberalism put too much emphasis on what had been accomplished in race relations, and too little on "that which was not eliminated, the aspects of racism which have continued to develop." She pointed to the high rates of poverty and incarceration among African Americans as evidence of the legacy of slavery. "Why do we refuse to acknowledge it?" she asked. "Why can we not see the way history shapes the way we are?"

Davis rose to prominence in 1970 when she appeared on the FBI's Ten Most Wanted Fugitives List for allegedly helping a group of prisoners known as the Soledad Brothers escape from a California courtroom. She stayed on the run for two months before being captured by police and was eventually acquitted of all charges. In 1980 and 1984, she ran for vice president on the Communist Party ticket with Gus Hall.

During the question-and answer-session after her speech, Davis said the country's "prison industrial complex" had created a situation where "punishment has become so profitable that so many corporations have a stake—a major stake—in committing to expand the prison system." While she stressed that she was not advocating this per se, she said she still believed that if all the prisons in this country were torn down right away and the inmates released, America would have no more problems than it does now.