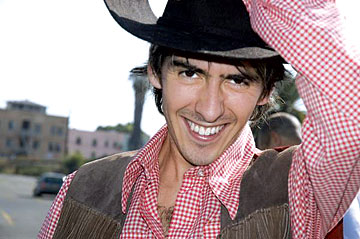 If you're heading to Chicago this summer, you can catch a couple of alumni bands among the headliners at the Lollapalooza festival August 7–9. London-based Dhani Harrison '01 (below) will sing and play guitar and keyboards with thenewno2 (a reference to "the new Number Two," in the classic British TV show The Prisoner). Harrison comes by his talent naturally; he's the son of Beatle George Harrison. Rolling Stone described thenewno2's debut CD, You Are Here as "a subtle mix of gentle vocals and electronics, with layered beats, throbbing bass, and occasional wailing guitar." Sharing the Grant Park stage will be The Low Anthem's Ben Knox Miller '06, Jocie Adams '08, and Jeff Prystowsky '06, who met at Brown. Nonesuch Records signed the Providence trio this spring and re-released their third album, Oh My God, Charlie Darwin. For the festival schedule and clips of the bands, go to Lollapalooza.com.