Playing with Fire: Pakistan at War with Itself by Pamela Constable '74 (Random House). 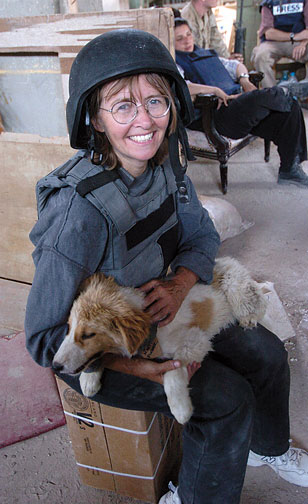 Chris Borouncle
Constable cradles Apache, a dog she rescued while she was embedded with Marines in Fallujah, Iraq.

As Kabul bureau chief and deputy foreign editor at the Washington Post, Pamela Constable has travelled extensively in Pakistan, and her interactions with ordinary folk and newsmakers have yielded empathy and human faces often missing from discussions about that country. That familiarity makes her new book, Playing with Fire: Pakistan at War with Itself, a veritable "Pakistan 101." Informative, readable, thoughtful, and nuanced, it has much to offer even insiders.

Constable is a gifted storyteller with a solid historical perspective, an eye for detail, and an ear for quotes that encapsulate major issues. At a camp for flood refugees, a mother of eight tells her, "If this flood has brought us to a school, then maybe it is God's plan." Her words echo aid workers' observations that flood-relief camps provided education and health care—often to people who never had access to those services before.

Constable characterizes this nuclear-armed, Muslim-majority nation of over 175 million as "a thousand separate worlds that may coexist and in close quarters but never intersect." She describes her book as "an attempt to explain to Western readers what Pakistani society is like today ... to create a backdrop for a dangerous and fluid moment in the history of a troubled but important country, to explain what is enduring and changing in its life as a nation."

As she examines the contradictions that make up Pakistan, Constable delves behind the scenes, providing intimate details and insights that rarely make it into the mainstream media. Moving from microcosm to macrocosm, she reveals a larger, often multi-dimensional picture. Take the story of Rukshana, a young woman who elopes with her cousin Amir to avoid being married off to an older man in compensation for a legal dispute, a traditional way of resolving such matters. When Constable meets the couple, they are in hiding from villagers who want to kill them for violating the tribal code of honor. Educated and aware, they fear for their lives and for the retaliation their families face: relatives are being arrested, their crops burnt, marriages threatened, girls forced to leave school. "Was all of this an acceptable price for love, or for a lonely crusade against the seemingly immovable forces of tradition?" Constable wonders.

Amir's response is tragically realistic: "Both of our families have suffered terribly because of us. All our dreams have been reduced to the single wish to stay alive.... We are just two people against an entire system.... From now on, no girl in our family will be allowed to continue her education, because of what we have done."

All this is linked to the need to overhaul Pakistan's cumbersome legal system and enforce law and order, Constable emphasizes. "Major assassinations are rarely solved," she comments early on. "[It] is convenient for them not to be solved. Court cases are chaotic affairs with myriad versions of events, suspects pressured to confess or recant, and innocent people charged or released through bribes."

Military dictator General Zia's imposition of controversial "Islamic" laws made matters worse, especially for religious minorities and women. Over decades the "counterproductive cycle of political or military intervention" has interrupted Pakistan's political process and prevented a democratic culture from developing. Now, as Constable acknowledges, tolerating the current elected government until the 2013 election is the only way to break this cycle—even if that means putting up with the much-maligned (often, but not always, with good reason) President Zardari.

Overall Playing with Fire is such a good read that pointing out misspelled names or local words, or Constable's reference to the rabidly right-wing Lahore-based newspaper The Nation as "pro-government," is being nit-picky. Still, it's hard to discuss human rights and the blasphemy law without mentioning the Human Rights Commission of Pakistan, or Pakistan-India relations without mentioning the Pakistan-India People's Forum for Peace and Democracy.

But those are quibbles. This compelling book provides important insights into the people of a country caught up in a war brought on by policy decisions in which they had no say.

Beena Sarwar is a Pakistani journalist and former Nieman Fellow who blogs at Journeys to Democracy (http://beenasarwar.wordpress.com); twitter @beenasarwar.