Movie producer Janet Yang '79 describes herself as a "cultural ambassador." Indeed, she's spent her career explaining the East to the West and vice versa. On campus this fall for the "Year of China" series, she described reading galleys of Amy Tan's novel The Joy Luck Club, about the fraught relationships among a group of Chinese immigrant women and their Americanized daughters. "I thought, 'Oh my God, somebody knows my life,'" Yang said. 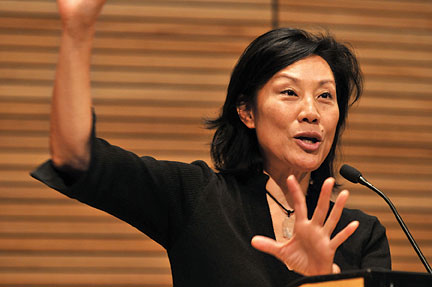 Frank Mullin
She fought to get the movie produced—funders doubted audiences would pay to see a movie about Chinese women—and it was a blockbuster. On campus, she screened two more recent movies, Dark Matter and a Chinese version of Disney's High School Musical, and showed raw footage of Americatown, Shanghai, an upcoming romantic comedy.
What do you think?
See what other readers are saying about this article and add your voice.