Does Brown have too many teams? The question was raised last spring, when the Simmons-appointed Athletics Review Committee found that the University has the smallest sports budget in the Ivy League for what is among the highest number of teams. Among the committee's recommendations was that President Simmons reduce the number intercollegiate teams from thirty-seven to thirty-four. Wrestling, skiing, and fencing would have to go. 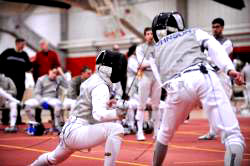 Not surprisingly, the reaction was heated. Skeptical athletes, alumni, and parents wanted to know how Brown could eliminate one of the top fifteen fencing programs in the country, or a ski team that has qualified for the last ten national championships.

Typical was the sentiment expressed in a letter to the editor in the Brown Daily Herald that was signed by seven former UCS presidents. "These athletic teams and the pride they have given us," they wrote, "helped shape our Brown experience, and we would be disappointed if future generations of Brunonians could not experience these wonderful memories."

After listening for several months to reactions that Simmons characterized as "a wide spectrum of emotion and thought including anger, confusion, betrayal, disappointment, disagreement and impatience," in October she recommended to the Corporation that the teams remain in place for at least another year while they are given a chance to raise enough money to become self-supporting.

"These sports," she wrote, "should demonstrate over the course of the year that they have assembled gifts and pledges that, when combined with existing team-designated support, constitute an income stream sufficient to generate no less than 100% of the current annual budget for that sport." (The teams had already raised hundreds of thousands of dollars.)

Among the other changes the Corporation approved are:

• An increase in the average Academic Index for admitted athletes.

• A rise in coaches' salaries to make them more competitive with the Ivy League.

• Closer scrutiny to guard against scheduling conflicts between sports practices and academic commitments.

"It is not clear at this time," Simmons wrote, "that academic authorities are in fact sufficiently in control of athletics at Brown." Despite the good work of many coaches, she noted, "they need the support and help of academic officers and faculty to align athletic competition with our core educational goals."

Reader Responses to Thrill of Victory