John Robohm was a thirty-year IBM man when he started his second act. After joining the company's sales department straight out of Brown, where he was an American civilization concentrator, he watched computers evolve from punch cards and mainframes to PCs and printers. 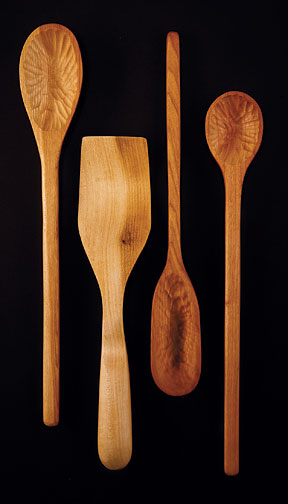 His job as a Big Blue marketer, he says, "was to perfume the pig," figuring out how customers might actually use the engineers' latest brainstorms. By the mid-1990s, however, IBM was downsizing, and, while Robohm escaped the waves of pink slips, the angst wore on him.

"I was only fifty-three, but our kids were just out of college," he says, adding in a singsong voice, "and I had a pension." So Robohm and his wife moved to their weekend house in Vermont. It was shortly after that, he says, that an ice storm inspired his woodworking career. The couple had installed a woodstove, but, even after Robohm had chain-sawed and split the bulk of the wood left by one particularly damaging storm, hundreds of smaller branches remained. He figured he could let them decompose on the forest floor, or he could find a use for them.

You need to understand here that, to Robohm, waste is the moral equivalent of the sound fingernails make on a blackboard. In addition to bringing in the woodstove, he has installed solar collectors on his house for hot water and two wind turbines and photovoltaic panels on his land for electricity. Certainly he could do something with those branches.

The answer was hooks. "I have a twenty-by-sixty–foot barn where I store all sorts of stuff," he says. He created hooks to hang things up and out of the way.

When friends started admiring his hooks and urging him to sell them, he began collecting promising branches and storing them in the barn. He lets the wood dry and stabilize for a couple of years before cutting and finishing it into hooks and shelf brackets. His photo-stylist daughter, Susan Robohm '93, and her web-designer brother created a website for the business, and their mother handles the customer service end.

The couple burns three to five cords of wood a season, and Robohm keeps an eye out for logs with the straight grain suitable for wooden spoons. "In the wintertime," he says, "when I'm not skiing, it keeps me out of my wife's hair."

All this is just one facet of Robohm's post-IBM career. He also maintains four heifers and raises honeybees. (He was captain of the men's crew at Brown, which may explain his love of physical labor.) If you visit livewirefarm.com you'll see that he is an expert on fixing electric fence chargers, a necessity of farm life.

Reader Responses to Waste Nothing