You might think that Ivy League sports are all about learning on-field tactics and finding the right balance between study time and practice time. But they’re also about food. 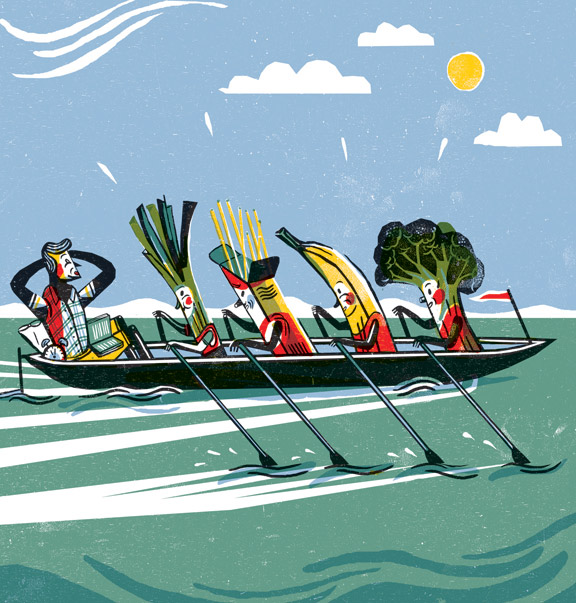 So says Anne Buffington, a Brown nutritionist and board-certified sports dietetics specialist, whose job includes persuading coaches and athletes to make nutrition choices that can lead to peak performance in games. Or, as Buffington puts it, she teaches athletes to “eat to compete.” Her lessons apply as much to alumni runners, gym rats, and weekend warriors as they do to college jocks.

“Sometimes nutrition is such an afterthought,” she says. “I tailor nutrition education in a way that shows them the benefits in terms of performance, or how this is going to benefit their recovery, or how this will help them prevent getting injured—because that is the selling point.”

Brown athletes face food choices constantly, from what to eat at the Ratty to how to handle late-night snack-bar options or the lure of Thayer Street food trucks. Buffington tries to educate teams on how certain foods work and what kind of an effect they will have on athletes’ bodies.

“I always challenge them to do one thing differently,” she says, “or make a different choice at a certain time. A lot of times they will see the benefits themselves, either in how it feels in their bodies or how it feels the next day in their energy levels.”

Buffington also says that athletes can get into trouble trying to change their bodies too radically to excel in their sport. “They turn to unhealthy behaviors,” she says, “whether it is to drop weight or drop body fat. Sometimes it turns into an eating disorder. They become very obsessive about the food they are consuming and become very inflexible with their choices, starving the body and not keeping up with the energy they are expending.”

One of the most common problems Buffington sees is fatigue. She works with medical providers to rule out such underlying issues as low iron levels, and she looks at an athlete’s sleeping habits. Once those issues are addressed, she suggests eating nutrient-dense foods and front-loading calories. Since most student athletes need lots of energy during the day for classes, for practice, and for strength training, mornings are the best time to fuel up, with lighter meals in the evening.

“One of the first things I try to implement,” Buffington says, “is structure in their day, and helping them to realize that it is very hard to catch up with your nutritional needs if you start out depleted. A typical athlete doesn’t give a lot of thought to nutrition during the day. Then there is a very large end-of-day meal, and then maybe another large meal a few hours later at night.”

This pattern, she says, is not ideal for student-athletes, and can be more disastrous later in life. “Even if they are maintaining their body weight,” Buffington says, “those individuals have a little more body fat. Spacing out their intake throughout the day could have a big effect. Not only do I think they have more energy during the hours that they need it, for that practice or training session, but they also can pull off body fat from being able to space meals out rather than trying to get all their calories in at one or two times during the day.”

Here are Buffington’s top-ten nutrition tips for athletes of all ages:

Reader Responses to Eat to Compete