All in the Family: The Realignment of American Democracy Since the 1960s by Associate Professor of History Robert O. Self (Hill & Wang). 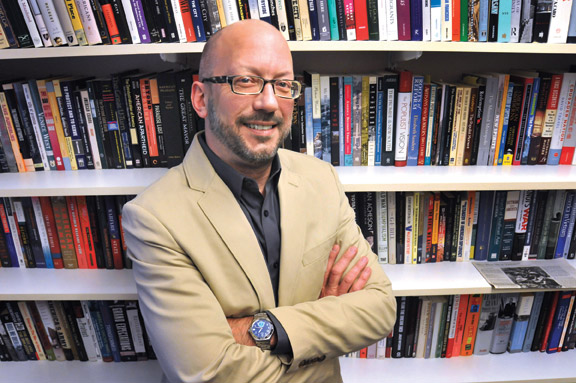 Frank Mullin
Historian Robert O. Self asks how far the state should go to guarantee civil rights and social freedoms.

“When Americans argue about gender, sex, and family,” says historian Robert O. Self, what they’re really arguing about is “equality, power, and money—in essence, about the nature and role of government.”

Political historians have traditionally dismissed cultural issues as “soft,” focusing instead on such “hard” subjects as military or economic history. But Self argues that since the 1960s cultural battles have shaped U.S. politics. In fact, acrimonious debates over abortion, birth control, and “legitimate rape” helped tip the outcome of the 2012 elections.

Self’s sweeping and meticulously researched history, All in the Family: The Realignment of American Democracy Since the 1960s, explores the attitudes of voters, political activists, and policymakers toward such issues as feminism, abortion, gay rights, welfare, and family values. Understanding the conflicts over these, he says, is central to making sense of the shift away from the social welfare state established in the 1930s toward an individualist free-market system.

All in the Family convincingly traces the ways that insurgent civil-rights, feminist, and gay-rights movements begun in the 1960s have upended traditional political assumptions while creating unease over these changes. In the early 1960s, for example, legislators issued far-reaching antipoverty, education, and health-care initiatives to protect civil rights and create opportunities for women and racial minorities. At the same time, many Americans refused to let go of the conventional “heterosexual white male breadwinner” model of American citizenship.

What caused these changes? Self attributes them to several unrelated forces that upended traditional notions of American manhood. An increasingly white-collar labor market, for example, left many men, especially blacks, out of work and families below the poverty line. Meanwhile, atrocities in Vietnam shattered the image of the honorable, benevolent citizen soldier, and gays became increasingly vocal in their quest for civil rights. 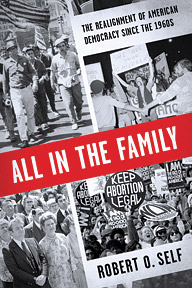 Then came women. “When Americans imagined men as breadwinners and soldiers,” Self writes, “they imagined women as wives and mothers.” In the early 1960s, women could not open bank accounts without their husbands’ consent, could be fired without cause if they were pregnant or deemed too old, earned roughly half of what men did, and occupied substandard positions that offered few, if any, prospects of upward mobility.

As the decade wore on, women entered the workforce in record numbers, bore fewer children, married later or not at all, and became increasingly resentful of their limited opportunities. They forced Americans to rethink not only femininity and masculinity, but also family, equality, freedom, and privacy. By the end of the decade, the women’s movement had secured abortion rights, sexual-harassment legislation, and affirmative action.

The demands of feminists and gay activists exposed fundamental tensions between equality and liberty in American democracy, Self says. How far should governments go to pass new laws protecting such groups? How adequate were the laws already in place? Was it enough, for example, for the state to declare that adults were free to love whomever they chose, or should it pass laws recognizing same-sex marriage? Did working women require government-enforced guarantees for such labor rights as paid maternity leave, child care, and affirmative action? Should the state provide aid to women seeking an abortion? Left-leaning reformers pushed for more state intervention, but they could secure only negative rights, Self writes—“the freedom to do as one pleased” and not the “positive rights that would make such freedom meaningful to many, many Americans.” Access to these new liberties remained limited mostly to those who could afford them.

Since the 1980s, the United States has seen the gradual demise of liberal notions of expansive government and the victory of markets allowed to operate “without government meddling,” Self writes. Reagan-era conservatives blamed the liberal welfare state for creating a sexually and morally permissive society that threatened the family. Conservatives hijacked the term “family values” (originally coined in the New Deal era) and transformed it into a bulwark against feminism, gay rights, and even communism. They proposed a return to the traditional “breadwinner” order, a view that many Americans found reassuring.

It’s likely that we will be trying to reconcile these two philosophies for a long time to come.

Reader Responses to How Many Laws?