Christine Waggoner’s first love was costuming. At Brown she discovered computers. And if your kids dragged you to Pixar’s blockbuster Monsters University this summer, you’ve seen how she merges those two loves. As the movie’s simulation supervisor, she oversaw pretty much everything that moved. 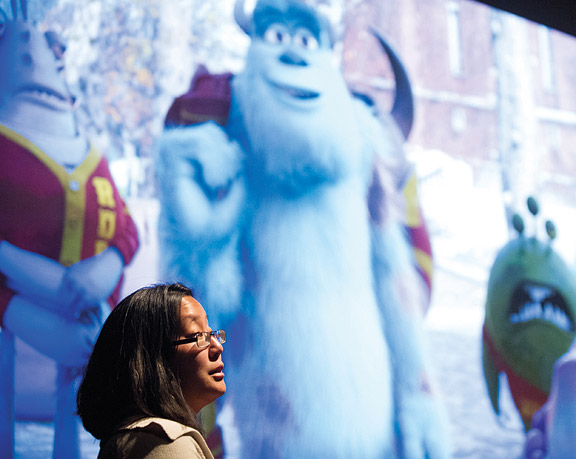 Disney/Pixar
Christine Waggoner explains how she makes monster's fur move naturally.
Think of a marionette, Waggoner says, by way of describing her work: a string for each hand, one per foot, a few for the head. Now imagine a marionette with millions of strings: one for each hair on the monster Sullivan’s enormous body and one for each square inch of the little girl Boo’s shirt. Waggoner writes computer programs or “simulators“ that are used to calculate the way the folds of clothing fall or the position of all those hairs.

Her interest in costumes goes back to when her mom taught her to sew. By the time she’d earned a Girl Scout theater badge, she was already working in professional costume shops. After arts high school, she spent four years studying costuming.

Since she enjoyed languages, she decided to concentrate in international relations, but she says, “I ended up in all these poli-sci and economics classes, and it really wasn’t me at all.” But the concentration had an analytical thinking requirement, which led her to computer science.

Waggoner double-concentrated in computer science and visual arts, and she was part of a group of like-minded students who formed a Group Independent Study Project to create an animated short film. As a junior, Waggoner stumbled onto a publication by two computer scientists who had created a cloth simulator, and she thought to herself, “That would be an interesting thing to work on.”

In no time, Waggoner was at Pixar working on Monsters, Inc. After that, she helped dress chef Gusteau for Ratatouille. She designed her own garments for the first time in The Incredibles.

What seemed like wizardry at the time is rudimentary by today’s standards, she says. For Monsters U., her team simulated 127 items of clothing and a variety of other objects.  “We simulated the zipper tabs on the backpacks,” Waggoner says. “There was a big vegetation shot where a giant monster marches on screen and all the trees and the banners shake.”

If all this seems like a lot of work for some pretty minor details, Waggoner says, “when you watch a live-action movie, you don’t think of the hairs on the head of the actor. But let’s say they had really bad makeup or a really bad wig on, it would distract you from the actor’s performance.” At the end of the day, she says, “we’re trying to create rich stories, with a rich level of detail.”