The Interestings by Meg Wolitzer ’81 (Riverhead).

Oh, the dangers of summer camp. It’s not so much the mosquitoes or the constant threat of drowning but those tricky early turning points that can shape your expectations for years to come. That’s one of the cautionary takeaways from The Interestings, Meg Wolitzer’s engrossing, ambitious, and decade-crossing ninth novel. 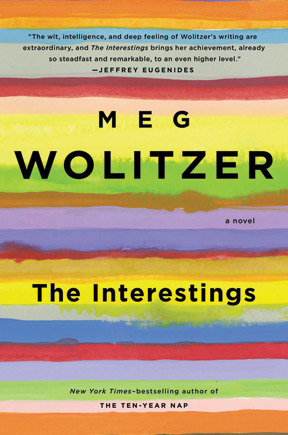 It’s the summer of 1974, and six fifteen-year-old friends at Spirit-In-The-Woods, a camp for artsy, possibly gifted teens in western Massachusetts, meet in a teepee-like cabin and decide to call themselves “The Interestings.” These are late-Boomer kids. They’re too young for the Sixties and all the mythologizing that follows, and they often feel as if they’ve somehow fallen through the cracks. But for now, “Just by being here in this teepee at the designated hour they all seduced one another with greatness, or with the assumption of eventual greatness. Greatness-in-waiting.”

Cathy longs to be a dancer but has the wrong body for it. Guitarist Jonah is the son of a famous but fading folksinger. Ethan is the homely, awkward kid who spends hours in the Animation Shed, drawing cartoons that will one day make him strikingly rich. The beautiful Ash, they all believe, will somehow be famous, probably as an actor, and her equally golden brother, Goodman, seems destined for the same. Julie Jacobson, a gawky girl from the unglamorous New York City suburbs, discovers at camp a talent for comedy and decides she’ll henceforth be known as Jules.

Other characters weave in and out as the novel moves to New York City, following Jules and Ash and Ethan through loves and losses and dampened expectations as they edge into midlife. But this is also a novel about friendships, and the ways friendships can stretch and deepen or fall away.

Much like Michael Apted’s series of Up films, where he checks in with the same group every seven years starting at age seven, Wolitzer’s wide-angle time frame gives the plot an energy that accumulates less from big events than from smaller ones. Combined with the many ways that possibility and potential can play out, they are what drive the novel.

Then there’s the knotty question of talent. If you’re an “Interesting,” is talent alone enough to get you through? Or is success the result of a complex equation involving luck and class and ability and resilience? And what counts as success? These questions float to the surface in many guises as the characters’ ideas evolve, and happily Wolitzer refuses to supply simple answers.

There are moments here when the parade of current events—Nixon’s resignation, AIDS, the Preppy Murder, the Moonies, antidepressants, 9/11—feel more like signposts than crucial parts of the narrative, but that’s a quibble. This is a generous, complex, and moving work, and readers who have lived through these decades will want to settle in and enjoy the ride.

Reader Responses to What Is Success?