Thanks to the exhaustive research of the 2003 Steering Committee on Slavery and Justice, we know that a few slaves were among the men who built University Hall in 1770. But the name of only one is known: Pero, whose owner, Henry Paget, was a Providence merchant with a showy home and a penchant for referring to himself as Henry Paget, Esquire. 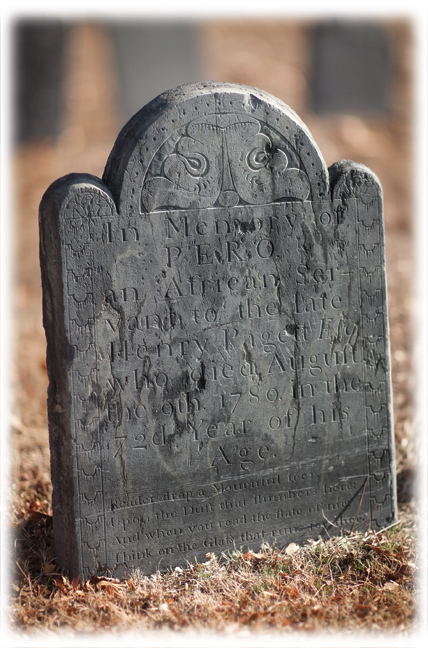 It was his family who most likely was responsible for Pero’s gravestone in Providence’s North Burial Ground, which describes the slave as “Pero An African Servant to the late Henry
Pagett [sic] Esq.

In a fascinating 2008 article published in Rhode Island History, a publication of the Rhode Island Historical Society, University Curator and Senior Lecturer in American Studies Robert P. Emlen tracked down every known fact about Pero. We know his last name—Paggett—only because he put it on the gravestones he bought for his wife and daughter, who died before him and whose gravestones stand beside his.

In his article, Emlen describes Pero Paggett working alongside free blacks and whites, the cooperative choreography of a construction worksite temporarily eclipsing the profound inequalities of colonial society. As craftsmen and slaves worked side by side, bantering and laboring, Pero might even have imagined what his life could be as a free man.

He could only imagine, because he died still a slave in 1780. But, as Emlen writes, he “managed to memorialize his family on his own terms, with
dignified, substantial gravestones.”