Is the Internet driving us to Xanax? Jonathan Walton, a religious scholar and social ethicist at Harvard, is by no means the first to connect our Internet habit to what he calls the “age of anxiety.” But he believes all those hours spent online are reducing our ability to radically empathize with others, which could be detrimental to social justice movements. 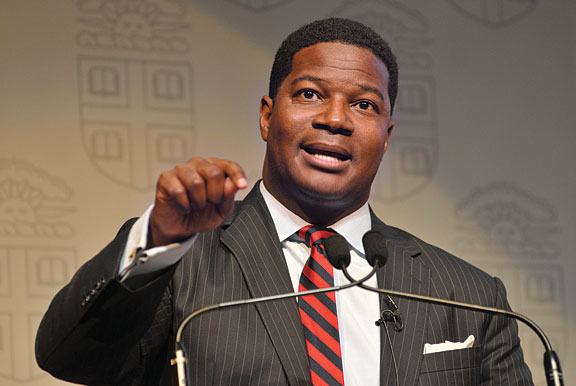 Frank Mullin
Walton said social media may be lowering our ability to empathize with others, which could undermine social justice movements.

Walton addressed the digital overlap between anxiety and social change in February, when he presented the 2016 Martin Luther King Jr. Lecture titled “Love, Power, and Empathy in an iLife Era.” The event was sponsored by the Office for Institutional Diversity and Inclusion.

Speaking from the stage of the De Ciccio Family Auditorium with a preacher’s inflection, as if delivering a sermon, Walton identified three major sources of anxiety: death, guilt, and—most important—meaninglessness.

When it comes to meaninglessness, he says, “the anxious mind seeks distraction.” And so we may find temporary respite from this anxiety in the constant stimulation of online worlds. But, as civil rights movements increasingly generate their visibility and momentum from social media, Walton says they are often undermined by the social media attention span: “Our commitment to a cause only lasts as long as today’s Twitter feed,” he quips.

Walton says we must resist this tendency and face up to our moral responsibility to empathize unwaveringly. Brown administrators can start, he says, by creating an atmosphere of inclusion for historically marginalized students: “Rather than students [of color] having to prove their worthiness at Brown, we must affirm their worth the second they walk in the door.

We must tell them: ‘Brown is a better place because you are here.’”

Pointing to Dr. King’s life and legacy as a paradigm for how meaningful this empathy can be, Walton says: “A precondition for love is empathy . . .  and justice is simply the social organization of agapic love.”
Walton received a standing ovation at the end of the lecture.