Ten years after the release of a groundbreaking report she commissioned to explore Brown’s involvement in the eighteenth-century slave trade, Ruth Simmons, Brown’s eighteenth president, returned to Providence on December 1 to deliver the keynote address at the three-day conference “Slavery and Global Public History: New Challenges." 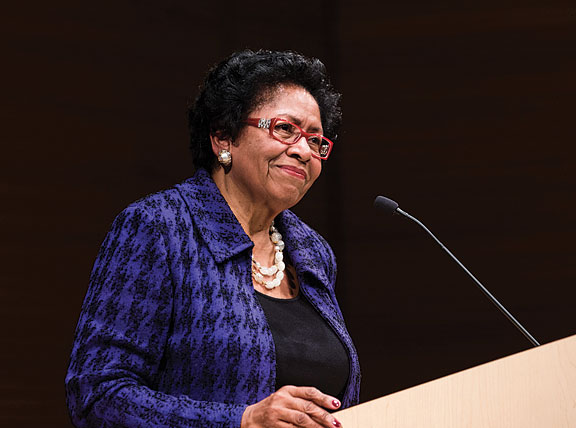 "Excellence is based on truth-telling," Simmons said.
Her remarks, “Universities and the Problem of Slavery,” emphasized the critical importance of truth-telling with a clear purpose. Simmons spoke about how, as an Ivy League president “barely three generations removed from slave ancestors,” she would ponder the portrait of the University’s first president, James Manning.

“We live and study among many artifacts,” Simmons said, and we can “whitewash histories of sordid racism” or “mistake moral faults for virtue.”

Simmons said the slavery and justice study at Brown, which was launched in 2003, was driven by “the simple aim to teach us about ourselves.” But ultimately, she said, it “opened up the world to what the University is”—a place of critical thought where the community can “constantly reassess what our aims are as a nation and strive toward that.”

What became known as the Slavery and Justice report prompted self-examination at higher education institutions far beyond Brown. The goal, Simmons emphasized, was not to bring shame to one group and power to another, but to “talk about how we share in a human condition. The question is not what malefactors did two centuries ago. We need to know about it, we need to bring it to light, but the question is: What are we doing about it?”

Among other things, Brown established the Center for the Study of Slavery and Justice, which hosted the December conference. The center’s director, Barrymore A. Bogues, who is a professor of humanities and critical theory as well as Africana studies, said that through work in the public humanities, the conference attendees, mostly scholars, curators, university and public officials, and public historians from all over the world, must contend with the complexity of slavery and its legacies.

“One of the most vexed issues of politics, history, and memory at the present time,” Bogues said, “is that of racial slavery and the ways its legacies continue to shape our national institutions today. This conference attempts to grapple with these issues at a moment when deep reflection is called for, both in America and the world, as old ideas about race—long thought to be dead and buried—have reemerged with force and passion.”

Since the 2006 Slavery and Justice report, a growing number of universities have explored their connections to slavery and exposed new questions and challenges, noted President Christina Paxson during the conference. “This is what universities should be doing,” she said, emphasizing the importance of rigorous research as well as higher education’s responsibility to expand ways of knowing that “perhaps, if we do a good job, position us to effect change.”

As an economist who studied social, health, and economic disparities in New Orleans after Hurricane Katrina, Paxson saw how people of color suffered disproportionately from the hurricane, thanks to the structural disparities that can be traced back to slavery, Paxson said. “How can the world still be like this?” many people asked at the time. Paxson added that the courage and conviction for change are needed now more than ever.

Simmons, in her keynote and in the question-and-answer session that followed, also stressed the need for action. “You can’t go back and redo history,” she said. “But you can be responsible for what you do today. . . . Excellence is built on truth-telling—and not on lies and secrets.”

Reader Responses to Lessons from Slavery