Faced with a Godzilla-sized celery root, a twisted two-pronged carrot, or a lemon that looks like Jabba the Hutt, Ben Chesler ’15 doesn’t turn away. In fact, he sees a very attractive proposition. 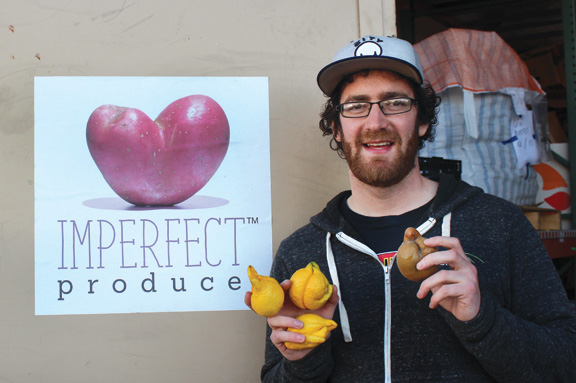 Chesler is one third of the founding team behind the San Francisco Bay Area’s 2015 start-up Imperfect Produce, which aims to reduce food waste by delivering to homes and offices fruits and vegetables deemed too ugly for supermarket shelves. Chesler, the company’s COO, estimates that nearly 20 percent of produce grown in the United States “never makes it to the human mouth in any form.” Imperfect Produce delivers produce that’s either “cosmetically challenged” or surplus.

Chesler is focused, fast-talking, and yet preternaturally calm for a 24-year-old running an operation with complicated logistics. “It’s all about getting [the produce] to the consumer before it goes bad,” he says. Users who sign up receive a box of imperfect produce delivered to their door once a week (organic or conventional—buyer’s choice), for which they pay 30 to 50 percent less than for similar produce they’d find at the grocery store.

Many consumers have bought in. Last spring and summer, Imperfect Produce tripled in size, from 2,000 orders a week in May to 6,000 in September. The company now has 10,000 active subscribers (some of whom get a delivery every other week), all in the Bay Area. (Imperfect Produce is headquartered in Emeryville.) Its slogan: “Ugly Produce. Delivered.”

“Being in this business,” Chesler says, “made me rethink country of origin and other concerns about produce that consumers typically have. We’re just taking the stuff that’s already grown to market. We’re not telling them to grow more conventional product, but it’s there and it’s going to waste. Might as well find a home for it.”

Imperfect Produce is an offshoot of the Food Recovery Network (FRN), which reduces food waste on college campuses by repurposing uneaten, cooked food from campus dining halls. Chesler cofounded FRN in 2011 with his friend Ben Simon, who is Imperfect Produce’s CEO. It was Simon, visiting Chesler at Brown in 2014, who convinced him to make the leap into produce recovery.

Laughing, Chesler recalls, “I actually vividly remember Ben showing up at my apartment on Arnold Street my senior year with this huge-ass sweet potato, going, ‘Yo, this would normally go to waste. There’s a business here. We gotta do this.’”

That year, Chesler, Simon, and their third partner, a food sourcing and distribution veteran named Ron Clark, successfully banked $615,000 to start Imperfect Produce, thanks in part to the Swearer Center’s Embark Fellowship, which offers funding to graduating students who found social innovation projects.

“I spent most of senior year raising money,” Chesler admits. “My roommates joked there wasn’t a single time I walked into the apartment not on a conference call. Which is probably true. So a little bit less drinking, a little bit more talking to investors than I could have imagined.”

Since August 2015, Imperfect Produce claims to have recovered 1.5 million pounds of produce that would otherwise have gone to waste. In late January, the company began offering delivery services in Los Angeles, their first market outside the Bay Area.

Chesler recalls growing up with a mom who “never threw out a single piece of food” and who washed out and reused Ziploc bags. It’s no surprise, then, that he’s brought his business acumen to food waste. “I tend to think in systems,” Chesler says. “Like, here is food. Here are people who need it. Let’s solve that.”