Christian Suarez ’18 likes animals a lot. So much, in fact, that he decided to develop an independent concentration called Animal Studies, which analyzes human-animal relationships and attempts to further discourse in animal rights. 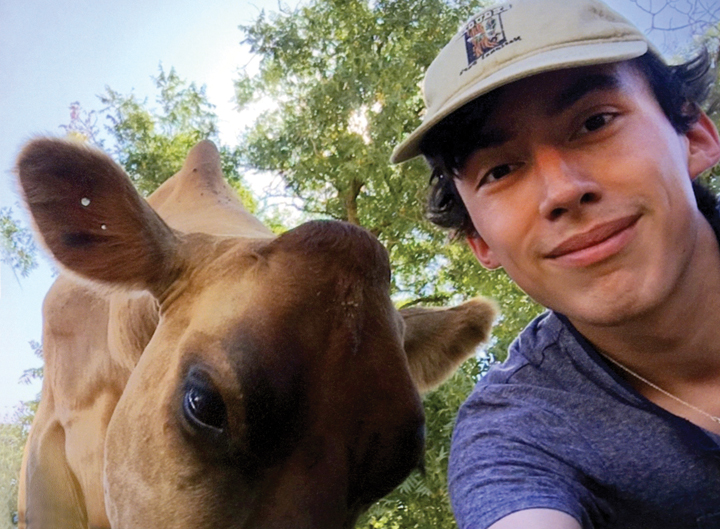 What exactly is Animal Studies?
Animal Studies is actually an established field—essentially it’s the tradition in the humanities of philosophical thought about the animal. It’s about challenging people to have a deep engagement with animals that can shatter their reductive conceptions. In Western society, we think that animals are valuable only if they have economic or amusement value. We kind of strip them of a right to their own life. Challenging the boundaries between animals and humans can make people uncomfortable, but the goal is to get people to interact with animals in a more compassionate way.

What made you decide to make this your academic concentration?
As a sophomore, I took an animal history class that introduced me to the field. But ever since I was really young, I had deep relationships with animals. We always had poodles in my family, and I never saw them as simply playthings or objects but as part of my family. I grew up Catholic, and I never for a second didn’t include them in my own spirituality. So my area of interest within animal studies looks at the way that developing a personal spirituality that involves animals becomes almost countercultural, since today in Western society, Western religions don’t really include animals in their vision of what God is.

Do you have any pets on campus?
I have an emotional service animal—a flame point Siamese cat named Cooper. I discovered you can have a pet while a student at Brown, which really provides a positive impact on life.

Ok, so we know animals are cute and furry. But, really, why do you feel such a profound connection?
With an animal I feel totally at ease. You can be with an animal in silence and feel a total sense of calmness and wonder, which is really distinct from relationships with humans. In many cases, relationships with people are grounded in the ability to communicate and express yourself and are filled with the pressures of societal norms. But in relationships with animals, you have a chance to almost step outside of being human and experience this other world.

Should I feel guilty about eating hamburgers?
I don’t want to generalize too much, but if you live in the Western world and are not in a food desert or low income, continuing to eat meat is a total disregard for animal suffering.

Fair enough. I can’t help but ask, though, what will you do with an Animal Studies degree?
This past summer I interned at this organization called Farm Sanctuary—they run sanctuaries for farm animals rescued from situations of abuse or factory farms. I would spend most of the day in the treatment trailer, where they kept the sick birds, and my job involved hand feeding them their special diets. There was also this little blind pigmy goat called Rosie, and I would spoon feed her. I’ve been considering going to law school for animal rights. Eventually, though, I think I want to end up at an organization like Farm Sanctuary. Working with animals doesn’t even feel like work to me, but a necessity.

ZOOPOETICS
Professor Ada Smailbegovic´
English 1710Z S01
“This course explores the intersections between the depictions of plants and animals in twentieth- and twenty-first-century poetry and the theoretical conversations about nonhuman worlds unfolding in emerging fields, such as animal studies and the environmental humanities.”

SPECIES MATTERS
Professor Natalie Lozinski-Veach
Comparative Literature, 1814Q
Christian: “We think about how animals are portrayed in literature, film, and theory: What makes an animal? Can animals be represented? How should animal suffering affect us?”

THE PHOENIX AND THE HUMMINGBIRD
Professor Iris Montero
Science and Society, SCSO 0392
Christian: “We look at the symbolic histories of animals within natural histories and the natural sciences and learn about their roles in colonization.”

POLITICS BEYOND THE HUMAN
Professor Sharon R. Krause
Humanities, 2970A S01
Christian: “It’s envisioning the ways that we talk about nature, the ways we envision animals and environmental justice and what responsibilities we have towards nonhumans.”

ANIMAL HISTORIES
Professor Nancy Jacobs
History, 0582A
Christian: “At one point, we took two or three weeks to learn about wolves and their history within the formation of America. The way that wolves were almost completely exterminated went hand in hand with colonization of America and the oppression of the indigenous population.”

THE ANIMAL IN CONTEMPORARY FRENCH CULTURE
Professor Thangam Ravindranathan
French Studies, 0750G S01
“We will consider in this course significant representations of the animal: From reports of animals stranded in conflict zones and natural calamities, to cute or clever animals cast in advertisements and popular media, from the rat of Ratatouille to the caged orangutan of Nénette, the new interest in the animal marks an age of heightened awareness of the costs and ironies of the human story. Taught in French.”

Reader Responses to Humans and Animals