Craig Robinson grew up shooting hoops on the South Side of Chicago and was offered a full basketball scholarship to the University of Washington. But he passed up the free ride after his father, who had not attended college, insisted, “Don’t pick a school based on how much money I have to pay.” 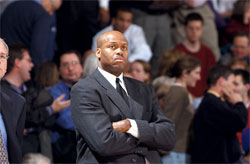 Robinson says he’s always considered the Brown team “a diamond in the rough.”

Robinson headed to his dream school, Princeton, where he became one of the top players in Ivy League basketball history. He is Princeton’s fourth-highest all-time scorer with 1,441 points. He led the Ivy League in field goal percentage in 1982 and was the first two-time Ivy League Player of the Year. He helped lead his team to two NCAA Tournament appearances in 1981 and 1983.

Now he wants to do the same at Brown. “I’d like to win the Ivy League,” Robinson says, “and have these guys know what it feels like to play in an NCAA tournament.”

Robinson was named head coach of Brown men’s basketball in June after Glen Miller left to head the program at Penn. Robinson comes to Providence from Northwestern, where he has spent six seasons as assistant coach.

“What really stood out with Craig,” says athletics director Michael Goldberger, “was his ability to appreciate what an Ivy League education means—to understand how it has the power to change lives.”

After graduating in 1983 with a degree in sociology, Robinson was drafted by the Philadelphia 76ers in the fourth round of that year’s NBA draft. He played two seasons in the European Basketball League, then earned an MBA. He later became managing director at Loop Capital Markets and coached on the side. He says he always imagined that once he made enough money to pay for his house and put his two children through college, he’d become a seventh-grade teacher and full-time high school coach.

Instead, the head coach at Northwestern offered him a job. Robinson took it and helped turn around the team, which rose to ninth nationally in scoring defense last season.

Goldberger believes Robinson’s greatest challenge will be moving the Bears into the upper echelon of the league. “Penn and Princeton have dominated,” Goldberger says. “Glen Miller has taken us a big step forward, but it’s hard.”

It will help, Robinson says, that all of last year’s top players will return next season. He also believes his experience as an Ivy League player will be a plus when it comes to recruiting. The new coach has always considered the Brown team “a diamond in the rough.” Now he intends to prove it.