One Way to Stop Genocide

This winter, Brown became the sixth university nationwide to put its money where its mouth is. Since the Corporation voted last February to divest from companies whose activities support the genocide in the Darfur region of Sudan, divestment has be-come a national trend. Following Brown’s lead have been such schools as Columbia and the University of Califor-nia, as well as a growing list of states, including New Jersey and Illinois. In April, Providence became the first U.S. city to divest from Sudan, thanks in part to the efforts of Scott Warren ’09 of the campus group Darfur Action Network (DAN). “No doubt momentum at Brown carried over to Providence,” Warren says. “And we’re trying to continue that momentum.” The group is lobbying the Rhode Island legislature to divest as well. 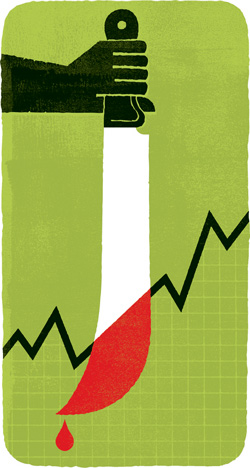 DAN is the Brown chapter of a national organization called Students Taking Action Now: Darfur (STAND), which claims more than 100 college and 200 high school chapters. For nearly a year, DAN has been working with the Brown Corporation’s Advisory Committee on Corporate Responsibility in Investment Policies (ACCRI) to fine-tune a coherent position on Darfur. “The University should not be making money from clearly immoral activities,” says ACCRI chair Louis Putterman, an economics professor. “It shouldn’t try to earn the maximum return on the dollar without any consideration for the ethical consequences.”

The large-scale violence in Darfur broke out in February 2003, when the government responded to local ethnic skirmishes by giving money and arms to local militias called Janjaweed, which are primarily allied with Arab tribes. Since then, the Janjaweed have been systematically targeting non-Arab civilians with a pattern of human rights abuses the Bush administration and other world leaders have termed genocide. More than 200,000 people have died and more than two million have been displaced, according to the International Crisis Group. Because the Sudanese government is funding the Janjaweed, companies that substantially aid the government are seen as complicit.

“By re­main­ing invested in these companies, we are, in effect, supporting the government of Sudan,” says Michael Williams ’08 of the Undergraduate Council of Students, which backed ACCRI’s recommendation.

In April 2005, President Ruth Simmons asked ACCRI to see whether any of Brown’s $2 billion endowment was invested in companies directly contributing to the conflict. The committee initially identified just one company, Zurich-based ABB Ltd., and called for Simmons to write the head of ABB expressing the University’s concern.

But by February, when the committee made its recommendation to the Corporation, the group was taking a harder line. Working with DAN, ACCRI had assembled a “do not invest” list of companies it wanted Brown to avoid until the conflict in Darfur is resolved.

To compile the list, the advisory committee used research by other universities that had already divested, as well as additional research by ACCRI and consultation with Institutional Shareholder Services. After the addition and subtraction of several companies, the list now totals fourteen: ABB, Petro­China, Sinopec, Tatneft, Alcatel, Siemens, Alstom, Bharat Heavy Electricals, Harbin Power Equipment Company, Lundin Petroleum, Nam Fatt Company Bhd, Oil and Natural Gas Corporation, PECD Bhd, and Schlumberger. ACCRI will continue to revise the list as companies change their practices and as the situation in Darfur evolves.

Divestment is a familiar tool for universities seeking to exact social change. In the 1980s, many U.S. institutions divested from companies doing business in South Africa to protest apartheid. After months of contentious debate, Brown agreed to divest its South African holdings over a three-year period, starting in 1986. More recently, in 2003, the University voted to divest from companies that manufacture tobacco products.

Ultimately, the Brown vote on Darfur is symbolic. By the time ACCRI’s recommendations were adopted this winter, Brown was no longer invested in ABB anyway, says Executive Vice President for Finance and Administration Elizabeth Huidekoper.

Still, as more and more schools, states, and cities divest from Sudan, the cumulative pressure is being felt. This April the Sudanese embassy released an open letter urging U.S. entities to reconsider their choice to divest. “We took that as a sign that divestment really was working,” says Warren.

Reader Responses to One Way to Stop Genocide