The Case of the Missing Mies

Last year, deepinside the Museum of Modern Art inNew York City, Dietrich Neumann made a curious discovery. A professorof architecture, Neumann was poring over the archive of Ludwig Mies vander Rohe, the father of modernist architecture, when he opened a foldercontaining a series of letters. Among them was a 1923 note to Mies froma friend named Gerhard Severain. The missive asked for help indesigning a house in Wiesbaden, Germany, for one of Severain’s friends,a British woman named Ada Ryder. 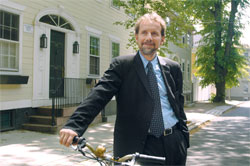 Miesreplied with drawings and plans. Severain, however, wrote back to saythe house would not be built; the deal to buy the land had fallenthrough. As far as history was concerned, the story had ended there.

Now, thanks to Neumann, history’s been revised.Filed in a different folder, the professor found a letter that everyoneelse had somehow overlooked. This note said that Ryder had in factbought the land, and that the first floor of the house was alreadycomplete.

The detective work began. Neumann uncovered thee-mail address of an architect in Wiesbaden with the surname Severain.The man, it turned out, was Gerhard Severain’s grandson. He invitedNeumann to Wiesbaden, a city in the central part of the country, to digthrough a box of his grandfather’s belongings.

In the box, Neumann and the younger Severain founda photograph with a familiar name—Ada Ryder—written on the back, alongwith a Wiesbaden address. Severain knew the street. When he and Neumannwent there, they easily recognized the house from the drawings, eventhough a slanted roof had been used to replace the original flat one.“It was really one of those great moments,” Neumann says. “It’s likefinding an unknown van Gogh painting or a Mozart opera nobody knewabout.”

Dietrich Neumann found this photograph of a Mies van der Rohe house. It helped lead him to the house itself.

Widelyconsidered one of the greatest architects of the twentieth century,Mies began his career designing traditional German homes with steeproofs and gables. He went on to renounce all ornament. His most famousbuildings are the German Pavilion in Barcelona, with its simple designand flat roof, and the glass-and-steel Seagram Building in New YorkCity.

Neumann describes the two-story Wiesbaden house asa “first, and somewhat timid, attempt to be a modern architect.” Itincludes some modern elements, such as the original flat roof, whichcoexist with more traditional ornamental flourishes.

“It’s not a great house, quite frankly,” Neumannsays. “But for scholars, it’s a missing link between his early styleand his mature style.”

Neumann is now completing a book on Mies. In fact,his work in the archive began as research funded by a $5,000 grant fromliterary agent Wendy Strothman ’72, who is secretary of the BrownCorporation. In March, Neumann returned to Wiesbaden to take part in apress conference about the house. The news made the front page of manyGerman newspapers.

Reader Responses to The Case of the Missing Mies