Sons of Providence: The Brown Brothers, the Slave Trade, and the American Revolution by Charles Rappleye (Simon & Schuster).
at first glance, there is little to distinguish James Brown’s 1731 disquisition on “Truth and Eror” from any of a hundred other contemporary sermons. Delivered from the pulpit of Providence’s First Baptist Church, the sermon was a more or less conventional Puritan jeremiad in which Brown castigated his congregation for forsaking the “promise of salvation” in their pursuit of material things—a pursuit epitomized by what he called “the Marchant Man.” 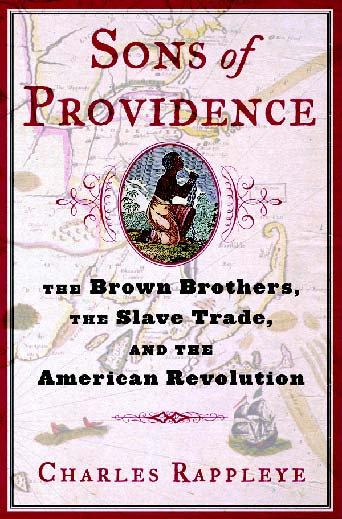 If the sermon’s form was familiar, Brown’s grieving tone was not. His only son, also named James, had turned his back on the pulpit occupied by three generations of his family to become a merchant. By the early 1730s, Captain James (as locals dubbed him) owned a fleet of ships, a trading store, a slaughterhouse, and two distilleries where sugar and molasses produced by West Indian slaves were distilled into high-proof rum. As if to confirm his apostasy, he inscribed the births of his children not in the family Bible but in a ledger.

James passed his entrepreneurial energy on to his five sons, James (who died young), Nicholas, John, Joseph, and Moses. The boys learned double-entry bookkeeping at an age when other children learned the alphabet. As adults, they built one of America’s first family fortunes in banking and iron forging, textiles and the China trade. They also helped to lay the foundations of the College of Rhode Island, what is today Brown University.

The Brown brothers have found an unlikely chronicler in Charles Rappleye. A Los Angeles investigative journalist, he has spent most of his career writing about twentieth-century organized crime, most notably in All-American Mafioso, his biography of mobster Johnny Roselli. This background proves apt preparation for unraveling the Browns’ tale of tortured family loyalty and the quest for redemption unfolding in the shadow of one of history’s greatest organized crimes: the transatlantic slave trade.

Rappleye focuses almost exclusively on brothers John and Moses, whose fraternal strife uncannily recapitulated the conflict between their father and grandfather. “Marchant man” John was a figure of robust temper and appetite (he weighed over three hundred pounds), an inveterate schemer who frequented the wrong side of the law. Moses shared John’s business acumen but was in other ways his opposite—pious, ascetic, and temperate.

In the 1760s the four brothers embarked on a series of joint enterprises, including one disastrous African slave-trading venture. By the end of the decade, however, they had begun to separate their interests, in part because of John’s commitment to the slave trade, which the others thought too risky. The gulf widened in 1773, following the death of Moses’s wife, Anna. Convinced that her death was a chastisement for his sins, Moses withdrew from the family business. He converted to Quakerism, manumitted his slaves, and joined the embryonic movement to abolish the slave trade. His conversion put him at loggerheads with John, who not only continued to traffic in slaves but also vociferously defended the trade. “In my opinion,” he once declared, “there is no more crime in bringing off a cargo of slaves than in bringing off a cargo of jackasses.”

Rappleye follows the two brothers across the last decades of the eighteenth century, using both published and archival sources to illuminate a relationship that was always strained yet never broken. When John was caught ferrying supplies to Continental forces in the early days of the Revolutionary War, it was Moses who ventured into occupied Boston to negotiate his release. While pacifist Moses spent the war years tending to the needy, John was the Halliburton of his era, supplying cannons from the family’s iron furnace at wildly inflated prices. But the chief focus of the book remains the brothers’ conflict over slavery, a conflict that climaxed in John’s prosecution in federal court for illegal slave trading—a prosecution brought by the abolition society Moses had founded.

Historians reading Sons of Providence will find things to criticize. Rappleye passes on a few dubious bits of family lore, and he sometimes strains his evidence in his efforts to chart the psychological depths of the brothers’ relationship. Readers learn little about other members of the Brown family and less than they might have about the broader contexts within which the brothers operated. But Rappleye has a nose for a story and a crisp writing style, as well as an appreciation of the murky depths of family love and loyalty, all of which make for an engaging book.