Faculty hate being told what to do. When Gordon Wood, the history department’s Pulitzer prize– winning expert on early U.S. history, delivered Brown’s inaugural Constitution Day lecture a year ago, he couldn’t resist a swipe at Congress for dictating that all institutions receiving federal funding host some activity to honor the U.S. Constitution. 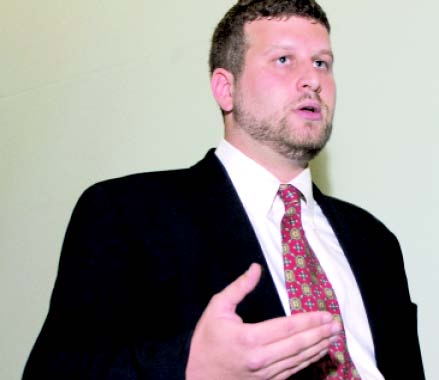 This fall, in the second speech fulfilling that annual requirement, Assistant Professor of Political Science Corey Brett-schneider took a different approach. Not only did he defend the day; he asked his enthusiastic audience of students and faculty to consider “what we owe the Constitution as citizens.” The Constitution, he said, “doesn’t just exist because it always has, but it exists because of the parties that re-enforce it.”

A lawyer and a political theorist, Brettschneider titled his speech “Beyond Rights: The Constitution’s Responses to Hate Speech.” He cited two seemingly similar cases that the Supreme Court judged very differently. In one, the Ku Klux Klan burned a cross on a man’s lawn after an altercation; the Court deemed the act to be a threatening illegal assault. But in another case, where the Klan burned a cross at a rally, the Court judged the act to be protected speech—a hateful viewpoint but protected nonetheless. The illegal act, according to the Court, was the threat, not the speech.

The Constitution is finally “about a kind of commitment to the idea of democracy,” Brettschneider explained. With it come responsibilities, such as arguing back when confronted with hateful viewpoints. “We need to protect and challenge these hateful viewpoints,” Brett-schneider reminded his listeners “or risk going further in the opposite direction.”

Maybe Constitution Day isn’t such a bad idea after all.