When the University of Chicago chose a new president this spring it looked east and found one of its own. Robert Zimmer, Brown’s provost for the last four years, will return in July to lead the institution where he was a researcher, teacher, and administrator for twenty-five years. 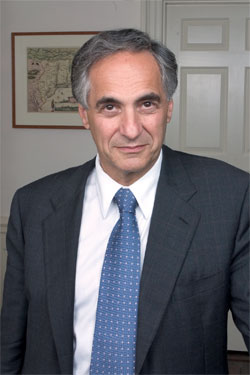 At Brown, Zimmer has been a key implementor of President Simmons’s Plan for Academic Enrichment, which has sought to reshape Brown’s administration to better support its academic philosophy and ambition.

Ambition, in fact, is a word Zimmer frequently uses when asked about his accomplishments as provost. His goal for the University, he says, is one he shares with Simmons: “to make Brown more ambitious than it had been before.”

“Ambition,” he says, “is an attitude of looking at what it is you think is possible. What is the kind of program that we can imagine starting, having, running? What kind of resources are we willing to commit to making it possible? What kind of institutional support? It’s also having a set of standards that you have to live up to.”

If Brown is to continue to compete for students with the best universities, he believes, it must think big in all its decisions. “It’s very easy to be complacent when you’re a top university,” he says. “And when you’re being complacent, it’s very easy to make decisions where you’re not demanding of yourself the degree of rigor and discipline that’s going to ensure that you get the best results.”

For example, the Plan for Academic Enrichment has called for the hiring of 100 new faculty members. But who should they be? In the past, he suggests, the University was less willing to pay the kinds of salaries and offer the institutional support that might attract the best scholars. Under Simmons’s direction, Zimmer has begun changing that.

Zimmer’s approach has been to improve the resources and support for research at Brown, improving the graduate and medical schools while keeping the school’s undergraduate pedigree intact.

“Brown, he says, “has been focused for many years, and taken as its central defining characteristic, the nature and quality of its undergraduate educational experience. One of the things that we’ve been trying to do is to say that the ongoing health of that activity depends on embedding it inside a richer fabric that includes a corresponding degree of attention and excellence in faculty research, graduate education, and medical education.”

He has done so by applying another of Zimmer’s favorite concepts: “multidisciplinarity.” Brown’s culture has long encouraged faculty members from different academic disciplines to work on problems together, and Zimmer has attempted to create academic structures that make doing so easier. Partnerships with RISD and the Marine Biological Laboratory at Woods Hole, for example, have been a particularly cost-effective way of increasing and improving research.

Zimmer has also overseen the creation of several multidisciplinary academic centers on campus devoted to such things as computational molecular biology, environmental change, and statistical sciences. This in turn has helped recruit top faculty members, he says, because, rather than having to fit into long-established programs, they can help shape centers and research that are in their infancy.

Will it work? “So many people are committed to making it work,” he says. “The plan has a lot of momentum. I came here hopeful, but inevitably questioning. I’m now more optimistic than ever.”

The real test, Zimmer says, is whether Brown can continue increasing its ambition. “The sustaining value,” he says, is really going to be how well that level of ambition takes hold.”

And that’s just the beginning. “Being an outstanding university is never a finished project,” he says. “There’s not a moment when you can say, ‘Now we’ve done it and can relax.’ ”

Reader Responses to Back to Chicago