It Takes a Woman

The p-word never really came up during the speech New York senator Hillary Rodham Clinton gave at Meehan Auditorium on April 8. No one referred to an elected president, as in the current president of the United States, or the one that will be voted in to replace him in 2008. Even politics barely came up, though at times the evening took on a certain political tinge. 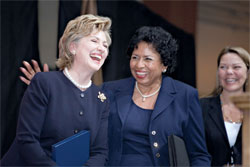 If fans in the audience, made up mostly of students, faculty, and VIPs, were disappointed by this omission, they didn’t show it. Hardly a political rally, the event was billed as “The Inaugural Doherty-Granoff Forum on Women Leaders.” The forum was established by Michael Granoff and his wife, Ellen Doherty Granoff ’83, to encourage women, who, in Michael’s words, “make up 50 percent of the population but account for only a small percentage of leadership positions,” to take on positions of power and responsibility.

Clinton obliged by focusing her remarks on such role models as Rosa Parks, 2004 Nobel Peace Prize winner Wangari Maathai of Kenya, and the woman sitting on the stage behind her: Ruth Simmons. “Women have to be part of every decision process,” Clinton said. “Is it any surprise that those who would use terror would also want to turn the clock back on women?”

The senator even managed to stay on point while responding to a handful of antiwar protestors who briefly tried to shout her down for her vote in support of sending troops to Iraq: “We are a steady and growing presence,” she said, referring to women. I’m proud of the fact that women are standing up and taking responsibility for their views. I certainly take responsibility for mine.”

But Clinton’s most animated remarks—and her audience’s most enthusiastic response—came when she began to criticize what she called “the current leadership.”

“We stand at a point in history,” she said, “where we have to decide what kind of country we will be and what kinds of values we represent.”

Defending the United States from terrorists, she said, is a “challenge on a par with any our country has ever faced.” But, she continued, it also calls for “leadership based on evidence and facts, leadership that is not a one-way conversation but a dialogue.”

Washington, she added, “is being turned into an evidence-free zone.” Citing Congress’s vote to raise the debt limit to $9 trillion, she said, “That is a massive transfer of responsibility on those of you sitting here tonight. It used to be said that women can’t do math. Congress can’t add or subtract.”

Picking up on a theme former president Bill Clinton used on the same stage a year earlier, she said that what’s most important for “the current leadership” is “tax cuts for the rich at a cost of services and investments for all the rest.”

Clinton concluded by addressing the difficulty women face in balancing career and family. The situation is getting better, she asserted: “It’s easier for me than it was for my mother.” Some of the students listening to her, she said, will choose a full-time career and some will choose to devote themselves full-time to their families. “For the vast majority of you,” she said, “you will have to balance both.… Each of you will be a pioneer in your own life.”

Reader Responses to It Takes a Woman