“I may look thepart of the imam, but I’m really very liberal,” Associate Chaplain Rumee Ahmed joked one morning this spring, his knit skull cap and beard contrasting comfortably with his button-down collar. 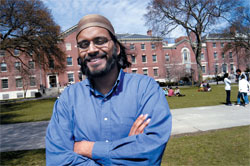 Rumee Ahmed is the first Muslim chaplain at Brown.

The charismatic Ahmed set up shop in January as Brown’s first Muslim chaplain, and his first task is to invent his job. While Muslim chaplains serve in the U.S. military and in prisons and hospitals, only a dozen or so hold paid positions at U.S. universities. He is building a network, though: a close friend is Wesleyan University’s new Muslim chaplain, and next fall Ahmed’s wife, Ayesha Chaudhy, starts what she calls “a part-part-time position” as chaplain at Connecticut College (she’s now finishing up a PhD at NYU on women and Islam).

Brown decided to hire a Muslim chaplain in 1998, when the Islamic student population reached four percent, says University Chaplain Janet Cooper Nelson. Brown’s rabbi, Catholic priest, and two Protestant ministers couldn’t meet these students’ needs. But finding candidates was tricky. At the time, no U.S. seminary was accredited to ordain Muslim chaplains (only one is now). So Nelson wrote to hundreds of Muslim students, parents, and alumni, as well as to colleagues and Islamic groups, for help designing the job and finding applicants.

Brown chaplains need to be part scholar, and part pastor, Nelson says. Ahmed is finishing up his doctorate at the University of Virginia, where he has studied scriptural interpretation and practice, a mix of Islamic studies and philosophy. Active in interfaith and peace groups, he had planned on an academic career, but says when he learned about the Brown job he couldn’t resist the chance “to make a real difference.”

In April he invited his UVA mentor, Judaic studies scholar Peter Ochs, to lecture on “Peace Through Intimacy: Friendship Among the Children of Abraham.” To increase awareness of the complexity of Islamic thought, Ahmed organized a lecture on Islam and reproduction. He’s teaching Arabic and Koranic exegesis, and after Friday prayers he and Chaudy host a weekly dinner for students.

For his fellow chaplains, Ahmed started a program in “scriptural reasoning,” which he hopes to expand to the wider campus community. Members meet regularly to discuss a scripture common to Islam, Judaism, and Christianity—the story of Cain and Abel, for instance—and contrast the ways their traditions translate that story and how those different readings influence religious practice. “In some ways, our differences can be more interesting than our similarities,” Ahmed says.

“Rumee has broad interests in social justice, both historical and contemporary,” says David Greene, vice president for campus life and student services. Greene says he’s been astounded by Ahmed’s “depth of intellect, his extraordinary energy, his warmth, and his immediate connection with students.”

“Students come to me with questions: should I wear hijab (a headscarf)?” Ahmed says. “I’m not an imam. I see my role as trying to help them figure out where to look for the answer: the Koran, the sayings of the prophets ... ” Most Muslim student associations are conservative, enforcing the traditional barrier between the sexes at prayers, and Ahmed is delighted by the openness at Brown. “If a conservative student is uncomfortable and wants a barrier,” he says, “the group will certainly listen to that person’s concerns, but the group will also consider the feelings of students who are uncomfortable with a barrier.”

Still, Ahmed says some conservative Muslims feel lonely at Brown, and he aims to build bridges. “Conservative students tend to be looking for community,” he says “and my goal is to create a place where people can find that.”

Reader Responses to Keeping the Faith