In November, a Fox News reporter snuck a hidden camera into Sayles Hall during a wild student party called SexPowerGod, giving Bill O’Reilly a chance to blast Brown. For University administrators, though, the real problem was the number of student party-goers who required medical attention for intoxication that night, even though the dance was alcohol-free. (See “One Really Bad Weekend,” Under the Elms, January/February.) To make matters worse, the previous night gunshots had been fired near Keeney Quad after people unaffiliated with Brown tried unsuccessfully to crash a fraternity party. (No Brown students were involved in the shooting.) 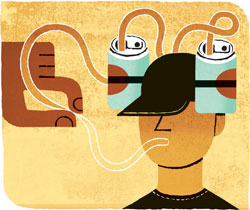 In response, David Greene, vice president for campus life and student services, appointed a committee to review Brown’s party policy. Chaired by Margaret Klawunn, associate vice president for campus life, the committee issued its report in March. It aims to curb binge drinking, in which students quickly consume vast amounts of alcohol, often in advance of a dry party. The committee suggested monitoring dorms for pre-party alcohol use and hiring a security company to work the door at large events, denying entry to intoxicated students. At parties that serve alcohol, the committee recommended stamping students’ hands with each drink purchase to track consumption.

Calling Sayles Hall “a historic space on campus that is not appropriately used for social functions,” the report suggested alternative party venues, such as Andrews Dining Hall, and said metal detectors should be available to student groups.

Reader Responses to The Morning-After Plan