Men’s Basketball After finishing its nonconference season 5–10, the Bears, as of late February, had gone 5–7 in the Ivy League, including a 4–3 record at the Pizzitola Center. On February 2 former head coach Glen Miller returned to Providence and led first-place Penn to a 77–61 victory. Brown’s best stretch came on February 16–17, when the Bears beat Harvard and Dartmouth to complete their first weekend sweep since 2004. 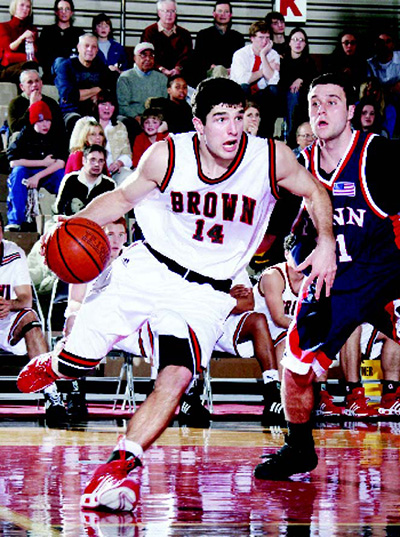 David Silverman
Team captain Mark McAndrew has kicked his play up a notch this season.

Craig Robinson’s first season as head coach has added fire and aggressiveness to the team’s approach. He installed a pressure defense that has made a crucial difference in many of the Bears’ victories, and he seemed to ignite the play of guard and captain Mark McAndrew ’08. As of late February, the Barrington, R.I., native led the league in Ivy League scoring with 19.5 points per game and was the three-time Ivy League Player of the Week.

As of this writing, the women’s basketball team has gone 2–8 since winter break, 5–21 overall, and 3–9 in Ivy play. The departure of Sarah Hayes ’06 and Colleen Kelly ’06 has left the Bears searching for a consistent offense. However, Shae Fitzpatrick ’10, Courtney Lee ’10, Lindsay Walls ’10, and Christina Johnson ’10 have all played valuable roles on this year’s team. The quartet led the Bears in an action-packed 57–54 victory over Columbia on February 10. With the team losing only four players to graduation this spring, this young squad should have a bright future.