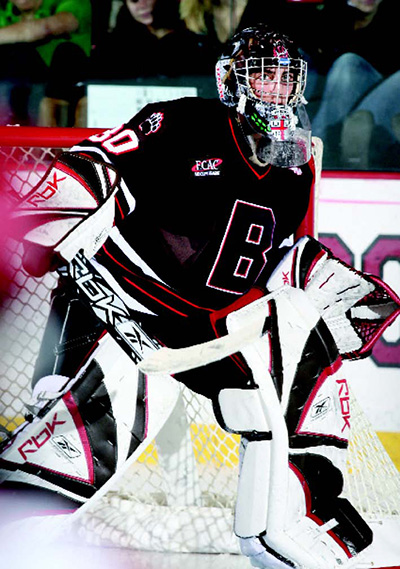 The women’s hockey season’s best highlights came on February 9. Coming off a 2–1 overtime victory over UConn the night before, the Bears began aggressively against Union College in Meehan Auditorium. The team scored two goals in the first period, the second on an assist by forward Hayley Moore ’08—her 100th career point. In the second period Brown extended its lead to 5–0 and eventually cruised to a 6–0 victory. Moore was not the only Bear to reach a statistical high that night. The win was Head Coach Digit Murphy’s 300th, a number that only two other collegiate women’s hockey coaches have achieved. The team finished its season on February 17, losing its last game to Harvard, 4–0, and ending up with a 10–17–2 record for the season. Despite the loss to the Crimson, the women had a strong second half, going 8–6–1 in 2007. It’s the kind of finish that gives a team hope for next year.

»Men’s Hockey At times this season the men’s hockey team has demonstrated strong potential. A solid 5–2 victory on January 20 over Cornell, which was then ranked fifteenth in the nation, demonstrated how good the team could be, and on February 17 Brown scored two goals in the last five minutes to tie a very good Harvard team. For most of the season, however, the good play was spotty. Over the last month of competition, Brown went 2–6–2 and ended the season eleventh in the ECAC with a 10–13–6 overall record. The team’s top performer was goalie Dan Rosen ’10, who was twice named ECAC Goalie of the Week and was one of fifteen finalists for the prestigious Walter Brown Award.