Old Before Their Time

Professionally, Leslie Gordon is, among other things, medical director of the Progeria Research Foundation, which means she is a leader in investigating and fighting Hutchinson-Gilford progeria syndrome, a rare and fatal genetic condition that causes rapidly accelerated aging in children. 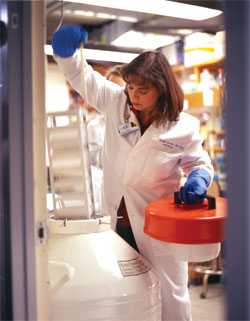 Keller and Keller
Leslie Gordon in her lab at Brown.

Personally, Gordon is the mother of a progeria patient - 9-year-old son, Sam, who was diagnosed shortly before his second birthday. Shocked by the lack of research into progeria, Gordon and her husband, Scott Berns, a Brown associate professor of pediatrics, established the Progeria Research Foundation. In 2003 Gordon was part of a team that identified the gene that causes the disease. The discovery not only gives hope to afflicted children and their families, but it could benefit a far wider population by shedding light on the aging process itself.

And Gordon isn't slowing down. An assistant research professor of pediatrics, she has coauthored two papers published this spring in Proceedings of the National Academy of Sciences describing a mutant form of protein that damages blood vessel cells. The finding may shed light on the progression of progeria and atherosclerosis, a leading cause of heart attacks and strokes. "We get to understand a key element of heart disease that we wouldn't understand without these kids [with progeria]," Gordon says.

Research on progeria has expanded dramatically since the foundation was established in 1999. According to Gordon, from 1950 through 2002, only 104 peer-reviewed articles on progeria were published; in the past four years there have been sixty. "The word is out," she says, "that the Progeria Foundation is funding grants, that tissue banks are available for study, and that there's a place for kids and families to go. It's spiraling upward."

Gordon divides her time between Rhode Island and the National Institutes of Health in Washington, D.C., where she works with children in her clinical studies. But when Sam gets off the school bus, Gordon turns into just another gushing mom. "Sam has tons of friends, and he's at the top of his class," she reports. "At first you notice he looks a little different, but after a couple of minutes, that goes right by you. Sam is awesome." Her work, she hopes, will keep him that way for years to come.

Reader Responses to Old Before Their Time