'What I Like About Jew with Sean Altman ’83 and Rob Tannenbaum ’83.On tour nationwide and available on the CD Unorthodox; www.whatilikeaboutjew.com. 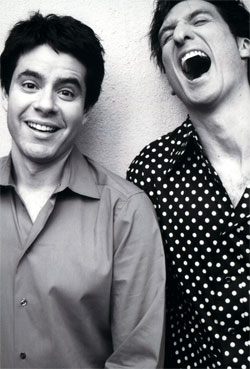 AP Photo/David J. Phillip
Rob Tannebaum and Sean Altman may look like grown-ups, but they haven’t left adolescence far behind.

In December 1998, Sean Altman and Rob Tannenbaum made their debut, at the Bottom Line in New York City. They sang just one song, “(It’s Good to Be) a Jew at Christmas,” a Tannenbaum original. “We said the word kike onstage,” he says proudly. “People got offended.”

Thus began What I Like About Jew, which Tannenbaum and Altman call “an unorthodox night of songs and comedy” that “celebrates modern Jewish life and culture.” That’s the polite way to put it. With songs like “Today I Am a Man” (“I’ve got two pubic hairs and a three-piece suit”), the two commemorate their bar mitzvahs and other Jewish traditions with gleeful sarcasm, lewd humor, offbeat affection, and—fortunately—enough smart lyrics to prove they really are adults, not simply the genitalia-obsessed fourteen-year-olds they seem to be. The Boston Herald has called the show “subversively funny,” and the New York Times described it as “ethnic pride mixed with high camp.”

In the show and on the CD Unorthodox, Altman and Tannenbaum reinterpret Passover with “They Tried to Kill Us (We Survived, Let’s Eat),” circumcision (“Just a Little Off the Top”), and even Christmas carols (“Reuben the Hook-Nosed Reindeer”). And those are the tasteful songs.

Tannenbaum and Altman write their own lyrics and music, and both sing, albeit with varying degrees of smoothness. “Sometimes I say at the start of the show that Sean’s the one with the beautiful voice and I’m the one who does something else for a living,” says Tannenbaum, who moonlights as Blender magazine’s music editor.

What I Like About Jew is only the latest of Altman and Tannenbaum’s musical undertakings. At Brown, Altman fronted a popular rock band, the Blind Dates, and Tannenbaum was a DJ at WBRU–FM. After graduation, Tannenbaum joined a “cruddy” punk band and freelanced for Rolling Stone, GQ, and the New York Times. Altman, in turn, founded the a cappella group Rockapella, which recorded nine albums, sold out concerts in the U.S. and Japan, and was the house vocal band on the PBS series Where in the World Is Carmen Sandiego? He left Rockapella in 1997 to chase his solo rock-star dreams, but still sings plenty of a cappella with the GrooveBarbers and with Kol Zimra, a more serious-minded Jewish group.

In the late 1990s the two reconnected at the gym. A bench press here, a dirty joke there, and suddenly there was “Hanukah with Monica” in honor of Bill Clinton: “’Tis the season to be noshin’ / On big Bubba’s hamantaschen.” They launched What I Like About Jew in 1999 as a variety show with other Jewish entertainers; they persuaded the Knitting Factory in New York to stay open Christmas Eve for the event. “It’s the worst night in the world to be Jewish,” Tannenbaum gripes. “There’s nothing to do except get Chinese food and watch It’s a Wonderful Life for the 900th time.” Since then the show has sold out clubs in Boston, Philadelphia, and Washington, D.C. They’ve even packed a few synagogues.

Which is not to say that everyone who goes to the show stays at the show. Altman and Tannenbaum are used to hearing chairs scrape after a couple of songs. Still, their minds are on their roots. They blast evangelical Jews for Jesus for abandoning the “team”: “Like mayonnaise on rye / You make your bubbe cry.” Altman and Tannenbaum identify with secular Jewish comedians—Jon Stewart and Sarah Silverman for example—who, like their predecessors Mel Brooks, Lenny Bruce, and Woody Allen, flaunt their Jewishness.

“My grandparents wanted nothing more than to fit in to mainstream American society,” Tannenbaum says. “We have the luxury and safety to celebrate and joke about our traditions instead of struggling to assimilate.”