Richard Fleischer began his Hollywood career as director of Child of Divorce in 1946 and Banjo in 1947, both forgettable films starring child actress Sharyn Moffett. He went on to direct more than sixty movies spanning many subjects and styles. The best known include the 1954 20,000 Leagues Under the Sea, starring Kirk Doug las, and The Boston Strangler in 1968, with Tony Curtis. He also directed the Kirk Doug las musical Doctor Dolittle in 1967 and the science fiction thriller Soylent Green in 1973. 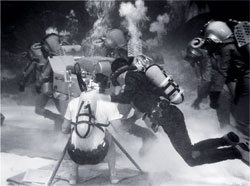 Fleischer, of Los Angeles, died March 25 of a respiratory infection. The son of animator Max Fleischer, who helped create the Betty Boop and Popeye cartoons, Fleischer majored in psychology at Brown and was an early member of the Brownbrokers. After Yale drama school, he went to work for RKO studios. He shared an Academy Award for best documentary feature as coproducer of the 1947 Design for Death, which tackled the underlying reasons why the Japanese invaded Pearl Harbor.

The Narrow Margin, a low-budget RKO film that Fleischer directed, earned critical acclaim when it was released in 1952. Set aboard a train, it involves a detective who has been assigned to protect a gangster's widow on her way to testify before a grand jury. The New York Times described it at the time as "a cat-and-mouse stalk," calling the film "almost a model of electric tension that, at least technically, nudges some of the screen's thriller milestones."

Fleischer went on to work for the Walt Disney studio and, later, Twentieth Century Fox, for which he directed numerous movies, including the 1959 Compulsion with Orson Welles and the 1966 Fantastic Voyage. In 1970 he codirected Tora! Tora! Tora!, about the Japanese attack on Pearl Harbor.

Later projects included the Arnold Schwarzenegger movie Conan the Destroyer in 1984. Fleischer also wrote an autobiography, Just Tell Me When to Cry: Encounters with the Greats, Near-Greats, and Ingrates of Hollywood (1993). He is survived by his wife, Mary; two sons, including Bruce '67; and a daughter.