An Officer and a Gentleman

In April 1945, as a member of the U.S. Army’s 477th Bombardment Group, George S. Lima was one of sixty black Air Corps officers arrested for trying to enter a white officer’s club at Freeman Field, in Indiana. Lima, now eighty-six, described the incident during an interview at his home in East Providence this summer. 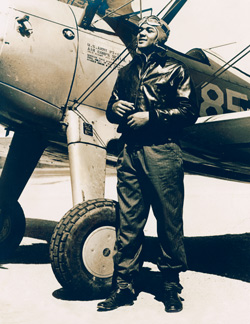 “When you’re a commissioned officer you get a notice from the president that you’re an officer and a gentleman, and you think that, presumably, you’re entitled to everything an officer is entitled to,” he recalled. “And we go to the club and try to get a Coca-Cola—they tell you they can’t serve you—then you react, you know.” As a result of the incident at Freeman Field—an embarrassing name, under the circumstances—the army ordered the base to integrate its clubs and replaced the unit’s commanding officer. Three years later Harry Truman ordered all the armed forces integrated.

A lifelong political and labor activist, Lima, the son of immigrants from Cape Verde, moved to Fall River, Massachusetts, after the war with his new wife and daughter. From there, Lima commuted to Brown—except during football training, when he lived in Hegeman Hall. He helped found the University’s chapter of Omega Psi Phi, a black fraternity, and he studied sociology partly “to get my head straight about this business about segregation and discrimination,” he says.

Despite Lima’s military service and Brown degree, when he sought a job after graduating, the only position the Urban League could find him was as a shipping clerk—the same occupation he’d held before entering the service. Lima refused to be discouraged. He became president of his local union and then worked as a full-time labor organizer for the American Federation of State, County, and Municipal Employees. He organized the same East Providence Veterans Administration hospital he now visits for diabetes blood tests and traveled widely for the union, once even touring Brazil to teach the differences between free trade-unionism and communist trade-unionism.

Lima’s union work eventually took him to Washington, D.C., where he wound up as an administrator for such federal programs as the War on Poverty and VISTA. Back in Providence, he served as president of the local NAACP; on the night in 1963 that Medgar Evers was killed in Mississippi, Lima was participating in a large sleep-in at the Rhode Island State House to push for passage of a fair housing bill (it later passed). In the mid-1980s, Lima returned to the state house as a two-term state representative and helped pass legislation requiring that a percentage of state contracts be awarded to minority-owned businesses.

A series of bypass surgeries forced Lima to retire in 1998, and he relies on a cane to get around now, but when he’s not fishing or playing table tennis, Lima is still active in local causes. He is starting a nonprofit, the Lambert-Lima Flying Squadron, to attract local children into aviation.

Lately, Lima has been studying Rhode Island’s role in slavery, attending two public meetings of Brown’s Steering Committee for Slavery and Justice. He sees a need “at least for an apology for some of the atrocities that happened during the slave time,” he says. He feels it’s important for Brown and other colleges to lead the investigation. “I mean, who could do it better than an institution like a university?”

Reader Responses to An Officer and a Gentleman