Brown researchers have solved the structure of a critical piece of synapse-associated protein 97 (SAP97), which is believed to play a role in everything from cardiac contractions to memory creation. Dale Mierke, associate professor of medical science, published the results in the Journal of Biological Chemistry. Now that part of the protein's structure is solved, scientists can create a molecule to disable it, Mierke said. That, in turn, will allow them to fully understand SAP97's role and help drug makers develop new ways to treat cardiac or neurological diseases. 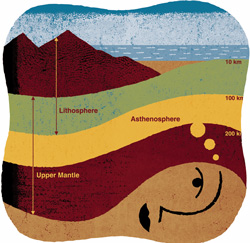 Many graduate students have two dreams: to be published in a leading journal and to challenge the conventional thinking in their field. This summer, geological sciences grad student Catherine Rychert achieved both, when she became lead author of a Nature paper that overturned a principle of plate tectonics. Geologists have long believed that temperature accounted for strength differences between two overriding layers of the earth's crust, a difference that is responsible for everything from earthquakes to volcanic eruptions and tsunamis. After sending soundwaves through these two geologic layers - the lithosphere and the asthenosphere - Rychert and her coauthors found that the relative strength of the layers cannot be explained by temperature alone, which may lead scientists to modify some ideas about how plate tectonics works. The findings, Rychert says, are "pretty cool. We know something new, literally, about the earth under our feet."

In 2001, the Centers for Disease Control recommended that all pregnant women be offered an HIV test, so that those who tested positive could take drugs to help prevent their babies from being born with the virus. But a study published in the Journal of the National Medical Association by Brown and University of Massachusetts researchers shows that only 70 percent of the women surveyed - all of whom earned less than $25,000 a year and who together reflected the composition of the female HIV-infected population - were given the test. "One question that arises from the data is, in public health settings, is there profiling by health care professionals to counsel and test more women who look like they are at high risk for HIV?" says coauthor and professor of medical science Sally Zierler. Assistant Professor of Community Health Deborah Pearlman was the study's lead author.