Before he begins any important experiment, Peter Schultz performs a ritual. He crosses his legs, fingers, and arms. If the test is really critical, Schultz crosses his eyes, too. All these body parts were pretzeled the night of July 3. 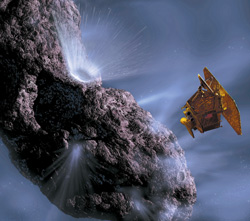 NASA
An artist's rendition of Deep Impact, showing both the collision and the flyby spacecraft that launched the probe and photographed the results.

Along with a team of NASA scientists, the professor of geological sciences was huddled in a conference room at the Jet Propulsion Laboratory in Pasadena, California, to watch a space probe crash into Tempel 1, a comet measuring about half the size of Manhattan. The collision occurred at 11:52 p.m. Pacific Standard Time. There was a small flash, and then a big one.

Schultz screamed. Then he bear-hugged Jessica Sunshine '88, a former student and NASA team member. The $333 million experiment was, literally, a smashing success. "It was like rooting for a race horse that finally made it over the finish line," Schultz recalled. "When we saw that flash, I thought, 'Oh, my God, look at that. Look at that.' And the room just erupted."

Schultz landed a spot on the comet mission, dubbed Deep Impact, because he is an expert in impact cratering - the science of what happens when a massive, fast-moving cosmic train slams into something. For the past twenty-five years Schultz has been loading a three-story gun at NASA's Research Park in Silicon Valley with glass, copper, or meteorite beads and then firing them at piles of sand, ice, dust, or mud. Once they hit their targets, at speeds ten times faster than a speeding bullet, the projectiles have created brilliant flashes, dramatic sprays of debris, and impressive craters.

All this blowing stuff up has helped refine theories of when and how comets, asteroids, and other space travelers shaped the face of planets and moons. The collision with Tempel 1 has put these theories to a real-world test.

For example, scientists have long theorized that comets are hard-crusted balls of dust and ice that give off glorious gas trails as they streak through the solar system. But early analysis of the Deep Impact data suggests that the surface of Tempel 1 is soft, as if made of fluffy, dirty snow.

Instruments on the spacecraft that launched the probe also detected organic molecules of carbon, hydrogen, oxygen, and nitrogen that could not be easily identified. Because material inside comets is relatively unchanged since the formation of the solar system 4.6 billion years ago, Schultz and his colleagues hope the project will answer basic questions about how the solar system formed and how water and other life-sustaining elements made their way to Earth.

In September, the Deep Impact team expects to publish early findings in Science. The report is sure to spark more international attention - and more work. "We've got years of research to do," Schultz says.