For the past several years medical research has supported what parents of teenagers already know: eleven-year-olds tend to be early to bed and early to rise, while thirteen-year-olds stay up late and sleep all day. 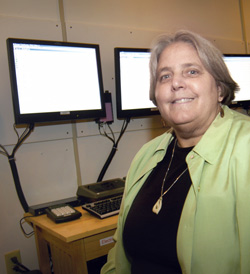 Mary Carskadon is one of the country's leading sleep researchers.

Scientists such as Professor of Psychiatry and Human Behavior Mary Carskadon have found that because puberty delays the body's production of sleep-inducing melatonin, the internal clock of adolescents keeps them awake well into the night. Given that adolescents also require nine to ten hours of sleep each night, biology seems to be at odds with early school starting times, piles of late-night homework, and afterschool jobs.

So, don't worry: those teenagers of yours aren't lazy; they're exhausted.

Brown Medical School professor Richard Millman, an expert in sleep disorders, published a report in the June Pediatrics that links together more than two decades of sleep research on adolescents and young adults. The article takes a broad look at the causes of insufficient sleep and the potentially devastating consequences: dozing off while driving, for example.

"The biggest message is that they need more sleep," Millman says, calling it obscene that ninth graders often wake for school before sunrise and eat lunch at 10:30 a.m. The report, which also offers practical advice to doctors, is based on research conducted over the years by experts, including Carskadon, who has been a leading figure in understanding adolescent sleep. Carskadon served on the committee that coauthored the report, as did Associate Professor of Pediatrics Judith Owens and Professor of Pediatrics Suzanne Riggs.

To understand teenagers better, the report suggests lumping them together with young adults. The sleep needs of a thirteen-year-old, Millman explains, are biologically the same as those of a twenty-two-year old, and sleep problems are rampant among that age group. The report mentions, for example, a Carskadon study of U.S. eighth-graders that shows an average school-night bedtime of 10:44 p.m. and a wake-up time of 6:35 a.m. Millman's report points out that around adolescence, the role of the parent shifts from setting bedtimes to acting as the morning alarm clock.

Young people between the ages of sixteen and twenty-nine, the report says, were most likely to be involved in automobile crashes caused by the driver's falling asleep. Lack of sleep may also lead to poorer performance in school. In a study by Carskadon and a colleague, students earning A's and B's reported earlier bedtimes and out-of-bed times. Another study showed that daily attendance increased and the dropout rate decreased after the city of Minneapolis adopted a later high-school start time.

Millman is quick to point out that because insufficient sleep is such a widespread problem, pediatricians, family practitioners, and doctors who treat students on college campuses need to carefully screen for such serious disorders as sleep apnea, in which breathing is interrupted during slumber. To help doctors diagnose such problems, the report includes a flowchart reprinted from a clinical guide by Owens and Jodi Mindell, a pediatric sleep expert in Philadelphia. Owens and Mindell are also the authors of a soon-to-be-released book for parents, Take Charge of Your Child's Sleep: The All-in-One Resource for Solving Sleep Problems in Kids and Teens.