The Marriage of Career, Politics, and Family

It's one thing to challenge and beat a three-term incumbent state senator. It's another to do it while managing a full-time career as a labor law attorney and a family that includes a severely disabled teenage son. Maggie Wood Hassan of Exeter, New Hampshire, has managed to pull it off. 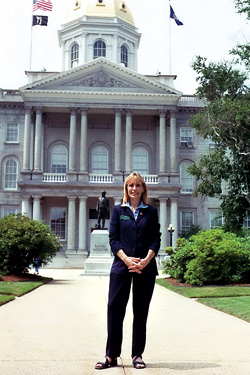 During the 2004 election cycle Hassan, a Democrat, ran against incumbent New Hampshire state senator Russell Prescott for his District 23 seat and upset him handily. It was the second time she had run against him, having lost two years earlier.

Since then Hassan has been practicing the artful balance of family, career, and politics. Adding to the complexity of this is the state's quirky political legacy that members of the legislature are essentially unpaid. They receive an annual salary of $100.

As an attorney Hassan is noted as one of the best in her field. As a state senator she has successfully reached across party lines to champion bills reforming health insurance and decreasing mercury emissions from electric generating plants (for this she has often been quoted by the New York Times).

Perhaps, though, it is the third leg of her life that is the hardest to balance with the other two. Hassan and her husband Tom '78 - he is the assistant principal of Phillips-Exeter Academy - also care for their two children, Margie (age 12) and Ben (age 16). Ben has cerebral palsy.

Asked how she manages, Hassan smiles and says, "You should ask Tom." She then takes a breath and says, "Balancing my family, career, and now being a state senator is a very hard thing to do. Beyond Ben and his needs, my daughter, Margie, needs to have her time and support, too. So it has not been easy. The balance is made somewhat more interesting in that being a state senator is as time consuming as you want it to be. There is always more to learn, more people to talk with, more to do in order for me to do a better job for my constituents, but I have to maintain a balance between that and the rest of my life."

And yet, despite the challenges, Hassan has found professional and personal success. Taking a moment to reflect, Hassan then says, "Having Ben turned Tom and me into true partners. That challenge drew us together and created a marriage that is a lot of shared work, and that has helped."

She smiles again and adds, "We were, I should add, good partners to start with."

Reader Responses to The Marriage of Career, Politics, and Family