Moderator of the Trustees

Thomas J. Tisch ’76, Brown’s newly elected chancellor, draws his inspiration from a single sentence in the University’s 1764 charter—the Chancellor’s role, it says, “shall be only to preside as a moderator of the Trustees.” 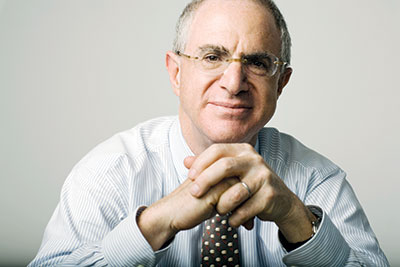 “That means you foster a culture of collegiality and openness to allow great decisions to be made,” Tisch says. “The Corporation has really functioned very much in that spirit and hopefully will continue to do so.”

Tisch was selected for the post at the February meeting of the University’s governing body, the Brown Corporation, and will begin his tenure on July 1. As Chancellor he will oversee the forty-two–member Board of Trustees. He will also serve on the Board of Fellows, which has 11 other members including President Ruth Simmons. Together the Trustees and the Fellows make up the entire Corporation.

A partner at Four Partners, a private investment firm in New York City, Tisch has served on the boards of numerous philanthropic and educational institutions, including the New York University Medical Center, KIPP Academy Charter School in New York, and the Manhattan Institute for Public Policy Research.

Tisch’s brother Daniel was class of ’73, and their father was the late Laurence Tisch, who helmed the CBS network and served as co-chairman and CEO of the Loews Corporation. Tom Tisch said his main function at Four Partners has been to “work on behalf of myself and the family ... primarily through the building of businesses from a long-term perspective.”

Tisch takes over Brown’s leadership from Stephen Robert ’62 at a time of enormous change. Robert, who began his tenure as chancellor in 1998, was known for supporting bold, ambitious changes designed to keep Brown competitive with other Ivy institutions. He played a major role in bringing President Ruth Simmons to Brown and gave her free reign to expand the faculty, overhaul the graduate school, and launch the largest fund-raising campaign in the school’s history. The University is more than halfway through that $1.4 billion campaign; the medical school is preparing for a major expansion; and the undergraduate curriculum is under review (“Exam Time,” page 12).

Tisch, who became a trustee in 2002, said he will help steer Brown through all these challenges, focusing in particular on making sure the University thrives in an increasingly competitive higher-education market. “The challenge is that we compete for students and faculty with institutions that have far greater resources,” he says. “Therefore, we need to do things better and smarter, as well as be very clear about what it is we can and should do.”

He expressed confidence, though, “that the things that are distinctive about Brown won’t be at risk,” and added that the College’s distinctive open curriculum “is safe and sound at Brown.”

Tisch said some of his fondest memories are from his time as an undergraduate. “I love Brown,” he said. “Some of my best friends are the friends I made there during college. I’ve kept up conversations with professors for the last thirty-one years.”

Serving alongside Tisch as vice chancellor will be Jerome Vascellaro ’74, a partner with the investment firm Texas Pacific Group (TPG) who co-chairs the Campaign for Academic Enrichment. Another of the campaign’s co-chairs, Matthew Mallow ’64, who heads the corporate finance group at Skadden, Arps, Slate, Meagher and Flom, will continue to serve as treasurer, and Wendy Strothman ’72, a principal literary agent at the Boston-based Strothman Agency, will remain secretary.

“One of the things that is so marvelous about Brown,” Tisch said, “is the collegiality and openness of the Corporation and the leadership. It’s a great testament to both Ruth Simmons and Steve Robert.”

Reader Responses to Moderator of the Trustees