In 1971, just a year after he had founded and become president of the National Association of Securities Dealers (NASD), Gordon Macklin convinced the brokers working on a then-fledgling market called NASDAQ to consider buying and selling stocks via their computers. The days of calling the market floor on a rotary phone and passing around mimeographed pink sheets gave way to glowing computer screens, as the era of electronic stock trading began. “Coming from over-the-counter to over-the-computer, even in its primitive stages, was a thrilling lifetime experience,” Macklin said later in an interview with Traders Magazine. 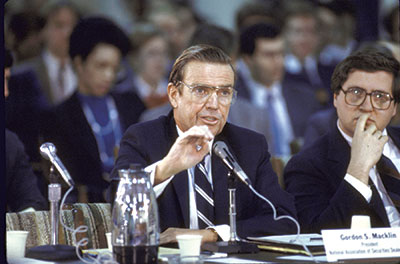 The growth of NASDAQ (which originally stood for National Association of Securities Dealers Automated Quotations system) soon exploded. The computers enabled a vast increase in trading volume so that by 1987, when Macklin stepped down as president, the total number of annual trades stood at a stunning 30 billion, a more than tenfold increase over the level in 1971. Most impressively, the NASDAQ could also now lay claim to being every bit the equal of the New York Stock Exchange, which had been around since 1792.

In running the NASDAQ, Macklin, who died of a stroke on January 30 at age 78, was very much following in the footsteps of his father, also named Gordon Macklin, who was the president of the Cleveland Stock Exchange in the mid-1930s. Immediately after college, the younger Macklin joined the Cleveland securities firm of McDonald & Co. as a sales trainee. By the time he left to helm the NASDAQ, he was considered one of the leading figures in the country’s security industry.

In the late 1980s, Macklin went back to working for private securities firms. He spent time with Hambrecht & Quist Inc., a San Francisco–based investment-banking firm that managed the initial public offerings of such giants as Apple and Genentech. From 1993 to 1998, he also served as chairman of White River Corp., an insurance company that invested in oil and software companies.

Macklin was also asked to serve on numerous boards, including those of Overstock.com, MedImmune, Martek Biosciences, and Spacehab. In 2002, he was serving on the board of the telecommunications giant WorldCom when it collapsed amid revelations that it had inflated its profits by $11 billion. It was the largest case of accounting fraud in U.S. corporate history, and as part of the company’s settlement with shareholders, Macklin and ten other WorldCom board members agreed to pay out $54 million.

Macklin gave generously to several educational institutions. In 1999, he donated $1.26 million to found the Gordon and Marilyn Macklin Business Institute at Montgomery College in Maryland. The Marilyn & Gordon Macklin Intergenerational Institute at the University of Findlay in Ohio is also named for him and his wife.

According to Ben Phinney, the University’s senior principal gift officer, Macklin also left a “substantial six-figure contribution” to Brown in his will. The money will go towards the establishment of the Gordon S. Macklin ’50 Endowed Fellowship in the Brain Science Program, an interdisciplinary effort at the University to study the human brain.

Macklin is survived by his widow, Marilyn, and four children.

Reader Responses to The Electronic Trader