Reckoning with the Dead 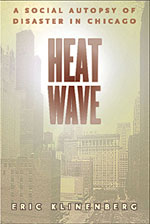 In the third week of July 1995, Chicago suffered the most disastrous heat wave in its history: temperatures soared above 100 degrees, humidity intensified, air quality deteriorated, and water and electricity failed in parts of the city. Long lines of emergency vehicles bearing corpses lined up outside the Cook County morgue; after it was filled to capacity, refrigerated trucks were called in to store the overflow of bodies. By the end, 739 people had died, more than twice as many as in the city's famous fire of 1871. In Heat Wave, Eric Klinenberg, an assistant professor at New York University, uses a sociologist's tools to explain what happened.

The most telling aspect of Chicago's tragedy was that so many of the people who died died alone. In probing this melancholy fact, Klinenberg shows that the calamity was less one of extreme weather conditions than one in which social factors played a lethal role. Why did proportionally more men die than women? More African Americans than Latinos? Why were the dead clustered in certain areas? And why were the city authorities so unprepared? Calamities tend to throw a society's deficiencies into relief, and Klinenberg's investigation of these questions and others reveals a distressing picture of "the secret city of those who die and live alone."

At the root of the many individual tragedies triggered by the heat wave was fear. A horrifying picture emerges from this book of elderly people holed up alone in rooms or apartments in poor neighborhoods, terrified of the crime and violence of the streets. The real tragedy, Klinenberg argues in this "social autopsy," is that the fear preventing Chicagoans from seeking assistance - even air and water - outside their four walls is not an inevitable consequence of big-city existence. By comparing the neighborhoods and backgrounds of survivors and victims, Klinenberg shows that the heat wave's deadly effects were aggravated by wrongheaded social policy, by infighting among branches of the city's emergency services, and by an emphasis on managing public relations rather than disseminating information and confronting problems realistically and head on.

Klinenberg emphasizes that his analysis of the factors behind the 1995 deaths is not a social history. Still this clearly written and accessible book contributes greatly to our understanding of the forces that make up history. In this case the history is a tragic one, but it is Klinenberg's hope that, like a pathologist's probing of a diseased body, his book will help prevent similar catastrophes.

Katherine A. Powers writes a book column for the Boston Globe. She lives in Cambridge, Massachusetts.

Reader Responses to Reckoning with the Dead