Remember 1970? The Beatles released their last number-one song that year (“The Long and Winding Road”), and Love Story was the top-grossing movie. Eighteen-year-olds were granted the right 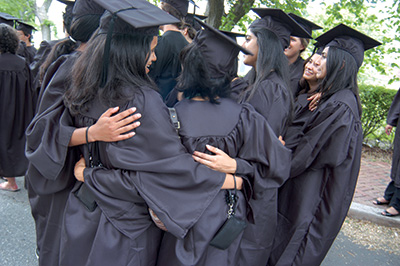 A group of graduates celebrate together.
to vote in federal elections, and National Guardsmen firing into an anti–Vietnam War demonstration killed four students at Kent State.

At least two things that began in 1970 are still with us: Earth Day and Commencement forums. The backdrop for Brown’s graduation that year included clenched fists and uncertain alumni perusing posters that featured a stylized silhouette of a National Guardsman wearing a helmet, sunglasses and a gas mask. “Is This the American Way?” the poster demanded. There had been a student strike on campus that spring, and seniors cancelled Campus Dance, arguing that it was too “frivolous,” given what was happening in the world. 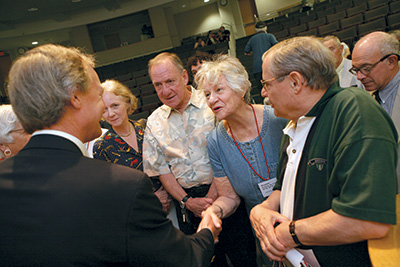 Instead, they organized workshops all weekend to focus on the issues of the day. “The workshops,” the BAM reported that July, “were a time for those who had been pulling and hauling in different directions to meet and talk.… [They] did what university classroom gatherings are supposed to do. They produced thought. They turned many people, if not from one opinion to another, to the consideration of new possibilities. Instead of sitting at home grumbling at the television set, or commiserating with peers, people were confronting each other.”

America was at war again during the 2007 Commencement, though it was hard to tell from the forums, which for the thirty-eighth consecutive year carried on the tradition of those 1970 workshops. Forums that took on themes of injustice—historian James T. Campbell’s presentation on Brown’s exploration of its historical ties to slavery, for example, or economist Glenn Loury’s analysis of the 500 percent rise in the number of people thrown into U.S. jails since 1970—were sparsely attended. 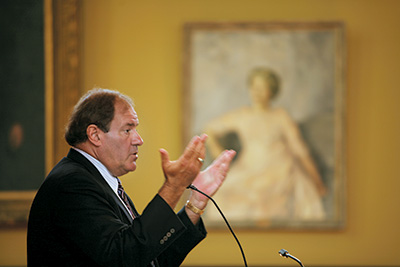 More often, the history discussed was nostalgic. Veterans of WBRU and BSR talked about the last seventy years of radio at Brown, which, according to former WBRU general manager Rita Cidre ’07, was the first school in the country to have a commercial, student-run radio station. Honorary-degree recipient and popular ESPN sports personality Chris Berman ’77 reminisced about broadcasting Brown football and basketball and the early days of ESPN. The network began as a cable channel for broadcasting University of Connecticut games, but when Berman and a colleague bought satellite time for their station, the salesman told them that for the same price ($35,000 a month) he could put together a package including all fifty states. They grabbed the deal, and in the fall of 1979 ESPN broadcast its first live sporting event, a professional slow-pitch men’s softball game between the Milwaukee Schlitz and the Kentucky Bourbon. 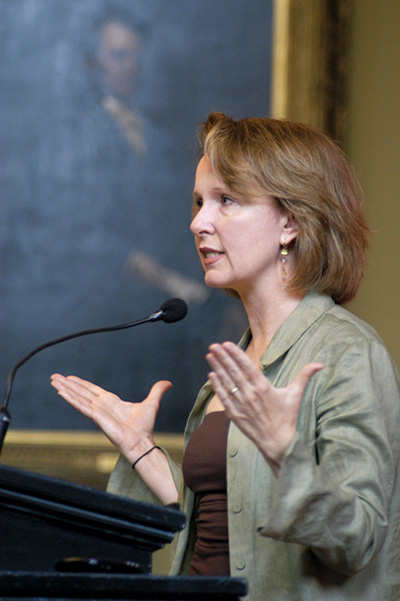 Actress and honorary degree recipient Kate Burton talks about her career in TV and theater.
Not surprisingly, the media were a hot topic at this year’s forums. Kate Burton ’79 talked about her success in television’s Grey’s Anatomy and her desire to return to theater. Web sites and new media were the focus of Bravo television-network president Lauren Zalaznick ’84, About Inc. president and CEO Scott Meyer ’91, and CEO and founder of RF/Binder Partners Amy Finn Binder ’77. Like many business leaders, all three are trying to anticipate the new consumer landscape, where, as Zalaznick put it, “People want more ability to interact with content.” Meyer pointed out that the response of many pundits to the video iPod was that no one will use it, an attitude that reflects the “fear and lack of understanding” that conventional business types bring to the world of new media.

Thanks to the medical school, medical and biological topics have become forum staples, and this year Assistant Professor of Pediatrics Leslie Gordon spoke movingly about the childhood disease progeria, which is 100 percent fatal. Gordon began studying the disease when, four months into her pediatrics internship, her son, Sam, was diagnosed with it. In response—and with Professor Emeritus of Biology Frank Rothman as her mentor—she formed the Progeria Research Group to promote research on the disease.

It was the kind of passionate devotion to a cause that triggered the forums back when Love Story still ruled. —Norman Boucher 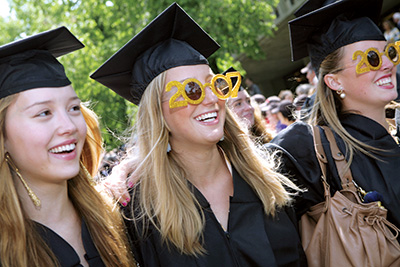 Seniors Jennifer Resch and Sally King beam as they observe the ceremonies. 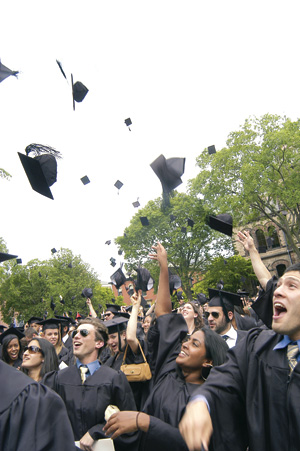 Graduates throw up their caps as the moment they were waiting for finally arrives.

Reader Responses to The Brown Way