A Comic in the Kitchen

“Never talk about health food on a date,” said Jessica Porter, the thirty-seven-year-old author of The Hip Chick’s Guide to Macrobiotics, in a recent phone interview. “It’s boring. Always has been, always will be.” Unless Porter’s doing the talking. 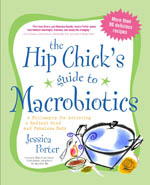 Based in Portland, Maine, she’s a full-time macrobiotic chef and occasional actress and stand-up comedian who mixes Eastern philosophy with Western sarcasm to demystify the diet most recently made chic by Gwyneth Paltrow and Madonna. “I knew there were millions of women seeing this word [macrobiotics] and saying, ‘Yeah, but what is it?’ I wrote the book for them,” Porter explained.

Yeah, but what is it? According to Porter, macrobiotics (from “macro” meaning big and “bio” meaning life) is both a philosophy and a diet. The philosophy is Taoist, based on a belief that forces of expansion and contraction, yin and yang, govern our world, our bodies, and our food. The goal, in diet and lifestyle, is balance. Porter discovered macrobiotics at a time when she needed balance badly. She was recovering from an eating disorder and trying to figure out what to do with her post-collegiate life. The practice satisfied her on so many levels that she dropped her graduate study of acting at NYU’s Tisch School of the Arts and took up macrobiotics full-time. “Most of the diet is humbling common sense,” she says. Refined flour, sugar, meat, and dairy are out; natural foods from the earth—whole grains, veggies, beans, and fish—are in.

If the diet sounds bland, the book is anything but. It’s part cookbook, part self-help, sweetened with pop-culture references and salted with humor. Porter is never preachy, often funny, always likable. A self-proclaimed “name-dropper celebrity hound,” she refers to whole grains as “the leading man of your diet” (think Tom Hanks and Harrison Ford). And although she promises that eating macro will improve everything from your skin to your sex life, when Porter breaks up with her boyfriend, she runs for the golden arches. “McHeartbreak,” she calls it.

Unlike Atkins or South Beach, macrobiotics is not a short-term fad. It takes time to experience its health benefits, and many macro recipes involve slow-cooking whole grains for forty-five minutes to an hour. “We can take control of our health by spending more time in the kitchen,” says Porter. Counter-cultural, yes, but the culture that gave us the microwave has also produced record levels of obesity. Fortunately, the wisdom of macrobiotics has begun to hit the mainstream. The U.S. government’s revised 2005 food guidelines recommend three ounces of whole grains a day, and General Mills has announced plans to make all of its cereals (even the sugary Trix and Lucky Charms) with whole grains.

Porter has no illusions of converting the world to macrobiotic eating. She simply encourages people to experiment and to start small—replace white rice with brown, regular pasta with whole wheat. Besides, she has bigger dreams to entertain. “I want to win an Oscar and go on Oprah,” she laughs.

Michelle Walson is completing her master’s in television production at Boston University.

Reader Responses to A Comic in the Kitchen