Katherine A. Powers Do you consider yourself out of step with the temper of the times? 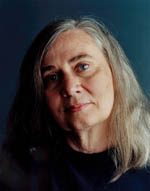 Marilynne Robinson I don’t think we know much about the temper of these times. There are stereotypes about materialism and consumerism and the decline of this and that. There is industrialized “culture” and “entertainment,” which seem intended for an audience that is assumed to be lazy or coarse or cynical. People tend to interpret this sort of thing as a product of the collective mind, rather than as the highly technical, capital-intensive product it actually is, and so their prejudices against the public are hardened. I find in my travels that most people think very well of their city or state or region, and assume that the rest of the country is in a state of moral and intellectual collapse.

Collectively we are a giant hypochondriac, who will hear only the direst prognoses. Hypochondriasis is also a disease, and the remedies its sufferers seek out can cause grave harm. I don’t think we do one another much good with these insistent cynical (or perhaps holier-than-thou) judgments we make of one another, and I think we could do better with our energies than to endlessly repeat them.

I don’t give much thought to the temper of the times. I write what is on my mind, and my books do well enough. So they must find a good number of sympathetic spirits.

KAP Flannery O’Connor wrote, “My subject in fiction is the action of grace in territory held largely by the devil.” Does that strike a chord with you?

MR No. I actively dislike O’Connor’s creating grotesques and then punishing them for being grotesque. Since the question is phrased in her religious terms, I will reply in mine. Calvin says that every human being should be seen and treated as someone to whom God has chosen to give His own image, and that an enemy should be seen as someone Christ has forgiven or stands waiting to forgive. That is to say, every human encounter, every one, must be seen as sacred, and there is a holiness in the human person that ought to shame the impulse to judge or to demean. That is the essence of my Calvinism, as an ethics and as an aesthetic. I have much difficulty finding the actions of grace in O’Connor’s fiction, which is a useful demonstration of the fact that Christian writers can be mutually incomprehensible.