The Man for the Job

Eli Adashi blames his wife, Toni, for the move. About a year ago, while he was a professor of obstetrics and gynecology at the University of Utah Health Sciences Center, he showed her a brochure he’d been sent about the vacancy at the head of the Brown Medical School. The brochure, which Adashi believes had been prepared by a search firm, described both the responsibilities of the medical school’s dean and the qualifications he or she should have. “She looked at it,” Adashi recalls, “and said she thought it was just the job for me.” 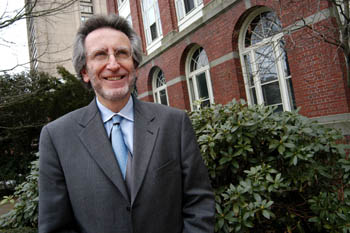 Eli Adashi on Waterman Street outside Arnold Lab, where his office is housed.

In January, Adashi officially became Brown’s dean of medicine and biological sciences, taking on the highly visible and sensitive task of managing the relationship between the medical school and its independent-minded affiliated hospitals while also overseeing the dramatic expansion of the school outlined in President Simmons’s Plan for Academic Enrichment.

A native of Israel who received his medical degree in 1973 from Tel Aviv University, Adashi brings to the job considerable success as a researcher, teacher, and administrator. He’s published more than 250 peer-reviewed articles and 120 book chapters or reviews, and he has edited or co-edited thirteen books in his specialty. While chairman of his department in Utah, he supervised forty full-time and sixty adjunct clinical faculty members.

Adashi particularly prides himself on his success at Utah at negotiating the minefield of relations between his clinical department and the medical center’s affiliated hospitals. By February he was scheduling regular dinners in Providence with medical school department heads and senior hospital administrators. (The Brown-affiliated health-care institutions are Lifespan, Care New England, the local V.A. Medical Center, and Memorial Hospital.)

Adashi’s principal challenge will be to bring a more far-reaching strategic approach to a medical school that has evolved in parallel with its affiliated hospitals rather than in concert with them. At their winter meeting last year, the Brown trustees approved a new agreement with the hospitals that was brokered by Provost Robert Zimmer, an agreement that included a variety of steps aimed at strengthening the dean’s ability to supervise the clinical faculty’s teaching and research as well as at streamlining the process for attracting research funding and commercializing research results. “Part of my charge,” Adashi says, “is to put those documents to life” and to implement a relationship with the hospitals that he characterizes as one of “constructive interdependence.”

Some reforms, Adashi says, are also aimed at responding to the sweeping effect of managed care on the way doctors, including clinical faculty, are now paid. “In some circumstances,” Adashi explains, “physicians’ remuneration is linked to productivity.” Because the hospitals, and not Brown, pay most clinical faculty members, any time that a doctor dedicates to research or teaching is time not spent treating patients. The fewer patients treated, the less money health-insurance companies reimburse the hospitals.

A key step, Adashi says, is to eliminate redundancies in administration that slow down researchers’ ability to attract lots of research funding.

“If you’re an investigator in a hospital and you want to do a study that needs a review board,” Adashi offers as an example, “you now may have to go through two or three review boards. I view this [streamlining] as an opportunity to remove a barrier from an activity we’d like to see flourish.”

Over the longer term, the current University administration would like to see the medical school flourish by getting bigger. The Corporation is on record as aiming for a 75 percent rise in research support, a one-third increase in the size of the medical school’s student body, and the addition of thirty-five new faculty positions in the biomedical sciences and in public health, an area of particular strength. In addition, construction has begun on a life sciences building that will contain 170,000 square feet of research space; an additional 105,000 square feet is already equipped and operating in a building Brown bought and rehabbed in downtown Providence.

How to manage all this growth and change? Adashi, who speaks softly and with deliberation, ponders the question briefly, then smiles: “Just take it five years at a time,” he says.

Reader Responses to The Man for the Job