The Upside of Deflation

What does that mp3 player that holds gobs more songs and costs less than last year’s model have to do with the growth of the economy? Or the digital camera that costs 85 percent less than it did three years ago? Just about everything, says Graham Tanaka in his recently published book Digital Deflation: The Productivity Revolution and How It Will Ignite the Economy (McGraw Hill). 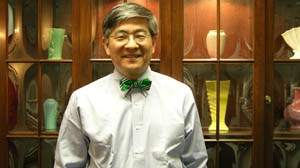 Tanaka, the chief economist, CIO, and president of Tanaka Capital Management in New York City, says Capitol Hill analysts are overlooking the larger economic impact of gains from new technologies. Although technology has revolutionized the economy, he warns, the government’s way of reporting on it has not changed. One result, he says, is the Federal Reserve’s tendency to raise interest rates; another is the government’s habit of exaggerating inflation.

Tanaka grew up in southern California, son of the first Japanese American stockbroker on the West Coast. Arriving at Brown as an applied math concentrator, Tanaka decided he needed real-world understanding. He double-majored in urban studies and engineering and immersed himself in economics. In 1973 he received his MBA from Stanford. Friendly and easygoing, Tanaka loves to talk about the economy. “This is big stuff,” he says of his findings, gleaned over twenty years in the business.

The subject of his book is not monetary deflation—Tanaka calls that “bad deflation”—but the tendency of advancing digital technologies to deliver higher-valued goods and services to consumers at prices that are the same as or even lower than the those of the previous year. The U.S. economy, Tanaka says, needs to grow more quickly to take advantage of these advances. “Economists in D.C. aren’t counting improvements in most consumer products and services,” he says. “Their data suggest that we’ve had no improvement in the quality or value of our health care or communications services in over 100 years.”

Tanaka wants the Fed to stop raising interest rates and the government to revise the way it reports such economic indicators as inflation. “Inaccurate data could be misleading policymakers into making the wrong fiscal and monetary decisions,” Tanaka says. He hopes the Fed will listen. “If they counted up how much advancing technologies are boosting the economy, my estimate is that they would measure 2 percent more value and therefore we would have a modestly deflationary economy, the Fed would be able to grow the economy faster, and that would lead to more jobs.”

Reader Responses to The Upside of Deflation