[students] When Harvard and Princeton announced in 2006 that they were phasing out their early admission programs, officials at the other Ivies wondered how they would be affected. 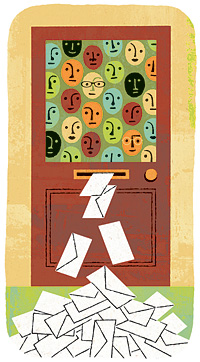 Timothy Cook
Now that the early-decision season is over at Brown, the numbers suggest that the early applicant pool may be getting more competitive. The University received 2,449 early decision applicants, up almost 6 percent. Although it’s impossible to say for sure, the uptick may be from students who would have otherwise applied early to Princeton and Harvard and decided to give Brown a whirl. Other top-tier schools that still allow early admissions saw even bigger jumps—Yale’s pool jumped by 36 percent and the University of Chicago’s rose 42 percent.

Brown’s dean of admission, James Miller ’72, cautions against reading too much into these numbers. Stanford and several other top schools, he says, did not see any increase in the number of applicants applying early. “We expected to see nationwide patterns that didn’t really emerge or materialize,” he says.

Miller believes that the real impact of the new policy at Harvard and Princeton will be felt this spring when another round of admissions is announced. Because early applicants to either Harvard or Princeton were forbidden from applying to any other school as a condition of being considered early, Miller says that schools like Brown never really had a crack at them. Now, though, those students must participate in the spring admission process, which allows them to apply to as many colleges and universities as they want. All of a sudden Brown’s applicant pool will include a few thousand more of the best and brightest students in the country.

Miller believes that Brown will accept many of these new applicants, giving the school a shot at getting them to matriculate. “We will need to be very aggressive in our recruiting efforts to try and get these kids to come to Brown,” he says. “We’re looking really hard at what we do.”