In Defense of Plagarism

“I’m all for plagiarism in its place,” said Randy Cohen at Salomon auditorium November 29. Cohen, who writes The Ethicist column in the New York Times Magazine, had been invited by the graduate school to dissect the crime of copying, and along the way he distinguished the flattery that underlies artful imitation from the deceit of academic and journalistic plagiarism. 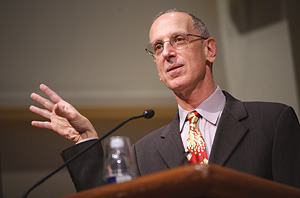 Some types of plagiarism are acceptable, New York Times Columnist Randy Cohen told students.
It’s one thing, he said, for Eric Clapton to lift a few bars from Buddy Guy and pay homage to the blues master. Similarly, Cohen defended Atonement author Ian McEwan from the recent accusation of lifting historical details from a 1978 memoir by a British romance novelist and former war nurse named Lucilla Andrews. McEwan credited Andrews in the book, and although she herself didn’t object to the borrowing, literary journalists were quick to pounce. A raft of prominent authors, including Margaret Atwood, John Updike, and Thomas Pynchon, then defended McEwan. Cohen argued that it’s the nature of literature to refer to and build upon what went before, with the aim of making it better.

But the rules are different in journalism and academia, he said. The public trusts reporters to get their facts right and to provide information that’s new, not copied. Similarly, he said, taking credit for someone else’s intellectual work violates the academic principles of discovery and intellectual honesty.

Cohen acknowledged that his own column has been plagiarized by a European advice columnist. He noted that his imitator didn’t rip off his answers, however—only the questions.

Reader Responses to In Defense of Plagarism