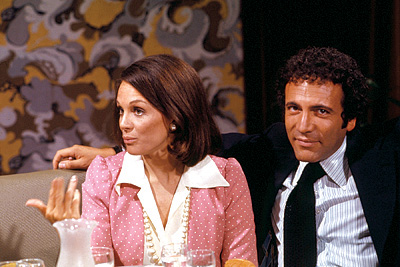 CBS PICTURES/Landov
The episode in which Rhoda and Joe married was one of the most popular in TV history—until their divorce knocked it off the charts. Groh received condolence letters from fans who didn't seem to grasp that he wasn't really married to Rhoda. He was written out of the show, Harper told the Associated Press, because the producers felt Rhoda worked better with her character single. "He was a lovely, lovely guy," she said, noting that they remained lifelong friends.

"David approached theater from a cerebral point of view," says his college roommate, Allyn Freeman '61. Groh performed with Sock and Buskin at Brown and with the American Shakespeare Theater. Graduating Phi Beta Kappa, he received a Fulbright Scholarship to study at the London Academy of Music and Dramatic Art. He then moved to New York City to study with Lee Strasberg, and spent the next decade piecing together roles in New York and London. He landed his first TV role on the Gothic soap opera Dark Shadows in 1966. Freeman says Groh's career received a huge boost when he filled in for the vacationing Judd Hirsch in the original off-Broadway production of Lanford Wilson's 1973 hit, Hot L Baltimore.

In the mid-1970s, Freeman says, "David landed a TV commercial that paid him enough to buy a car and move to Hollywood." Judd Hirsh had turned down the part of Joe on Rhoda (he didn't want to play second banana to Valerie Harper, says Freeman), and once again Groh stepped in.

Groh made his Broadway debut in Neil Simon's 1977 Chapter Two. From 1983 to 1985, he played D. L. Brock on the daytime soap opera General Hospital. Then he moved back to New York to perform off-Broadway and teach at the Actors Studio. He acted in films (Get Shorty, Two-Minute Warning, and Victory at Entebbe), had recurring roles on Baywatch and Law and Order, and guest-starred on TV shows such as The X-Files, L.A. Law, and Murder, She Wrote. In recent years, he starred in a half-dozen independent films, and at the time of his death from kidney cancer he was working on a film project, Lower East Side Story, with his third wife, actress Kristin Andersen. (It is in pre-production.) In addition to his wife and a son, Groh is survived by his mother and sister.