In the wee morning hours of a summer night in 2002, Joachim Dietiker asked Michelle Marsidi to dance. They were at a tango festival along the northeastern coast of Spain, and the dance floor was along the Mediterranean Sea so the revelers could tango while watching the sun rise. 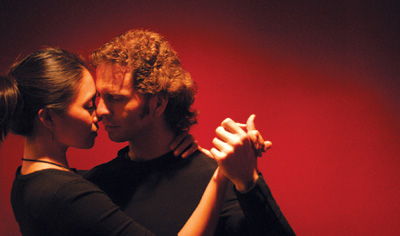 "It was beautiful dancing with him," Marsidi recalls. "In tango you have these fleeting moments where even though you may not speak the same language you find another way to communicate. This was one of those moments."

Some six years later, the couple now lives together in Basel, Switzerland, where they teach tango classes at Tangoschule Basel, a local dance school. Their specialty is Argentine tango, which has its origins in the working-class brothels of Buenos Aires and has always been associated with romance and sensuality. Rather than prescribing basic steps, this variety of tango requires constant improvisation. With their upper bodies in contact, dancers match their movements to the legato or staccato movement of the music.

"It's like having a conversation with another person," Marsidi says. "Sometimes it works very well, and you have an amazing connection."

The one aspect of the 100-year-old dance she did not like, however, was that the man is always supposed to lead. "In traditional tango, it's not so easy to feel your partner leading you and at the same time find a space for yourself so you can feel like you are contributing and dancing, and not just being passive," says Marsidi. She still lets her partner lead, but says she has moved the dance to a "more sophisticated level" where she and her partner send each other subtle signals back and forth as if in an animated and equal conversation.

When she first met Dietiker, who is Swiss, in Spain, he was romantically involved with someone else. When they saw each other a few years later at a tango festival in Paris he was single and the two reconnected while dancing.

Dietiker, who was teaching tango in Basel, invited Marsidi to join him. They have been living together for a year. During their first dance in Spain, "I didn't know if something was really happening between us or it was just the magic of the moment," Marsidi says.

Of course, teaching tango isn't the most lucrative of professions, but Marsidi says this doesn't matter. "I don't know if I could ever stop dancing," she says. "It just feels perfect."

Reader Responses to It Takes Two