Long Ride on a Short Bus

"I'm a Brown cliche," Jonathan Mooney said while sucking down a mug of strong black coffee on a recent morning. As a guest of the Sheridan Center for Teaching and Learning, he'd lectured on campus the night before about learning disabilities and had signed copies of his new book, The Short Bus: A Journey Beyond Normal. 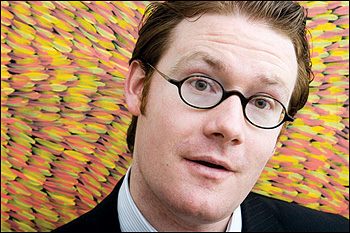 The book chronicles a 2006 cross-country trip Mooney took in a stubby yellow school bus—the kind used to ferry kids to special-ed classes. Mooney chose the vehicle carefully; as a child he'd spent time on what he calls the 'tard bus himself. Diagnosed with dyslexia and attention problems, Mooney didn't read until he was twelve. Other kids shunned him because he couldn't sit still, so at school he hung out with janitors in the hall. On Fridays he played hooky to avoid the humiliation of spelling tests. Craving "normalcy," Mooney mastered his impulsivity and raised politeness to an art form. He excelled on the soccer field and played the part of the hard-playing, hard-drinking jock. Then an injury forced him to rethink his approach.

Mooney transferred to Brown ("somebody took a risk on me," he says), concentrated in English, and graduated with a 4.0 grade average. While in school, he and Dave Cole '00 coauthored the book Learning Outside the Lines about their shared experiences with dyslexia and attention deficit/hyperactivity disorder, better known as ADHD. In 1999 Mooney won a $30,000 Truman Fellowship for graduate school, but he's so busy he has yet to use it. Besides, he says, he hasn't found a degree program that fits his interests. Instead he has taken the independent concentrator's approach of writing, lecturing, consulting, and generally advocating on behalf of people with learning differences.

For The Short Bus, Mooney set out to meet other "freaks." He interviewed a deaf-blind girl with a wicked sense of humor, a beguiling, transgendered ex-lobsterman named Cookie, a man with Asperger's syndrome, and Kent Roberts '00, an old friend who on campus performed stand-up comedy for twenty-four hours straight but who'd been having trouble holding a job. The unbridled creativity that fueled his friend's comedy, Mooney says, "is a disadvantage behind a desk," and he worries that people like Roberts can't survive in the work world.

Mooney is now working on his third book. "I'm interested in the way we pathologize difference as a culture," he says. He wants to shatter myths he believes dominate our thinking about education: that good kids are compliant and noncompliant kids are bad. ("It's a matter of managing the behavior vs. pathologizing the child," he says.)

Another myth is that smart kids read and write well, that school-based intelligence is what counts. We should be valuing cognitive skills, Mooney argues: "Universities are one of the biggest scams in the world," he says. "Universities are not graduating 'big thinkers.' They self-select for that. Universities should add value. Brown takes most students at an eight, and they graduate at an eight. I went from a four or a five and ended up at an eight."

Mooney also serves as a consultant for businesses and governmental organizations. His goal is to help marginalized young people—impoverished kids and those diagnosed with ADHD and learning disabilities—establish their careers. In a way, this continues his work with Eye-to-Eye, a program he cofounded in 1997 at Brown that pairs kids with adults who have succeeded despite their own learning differences. The program now has twenty-eight chapters and Mooney continues as the organization's president.

And he's also touring the country lecturing at schools, universities, churches. Before he came to Brown this March, he'd spoken at the Social Security Administration. "We need to make sure kids aren't hanging out with the janitors," he said. "We need to change the system."

Reader Responses to Long Ride on a Short Bus