One of Our Oldest Living Alums Tells All

There are few people in the world better qualified than Sarah Saklad to offer advice on life. At age 100, she has, after all, collected quite a bit of experience. 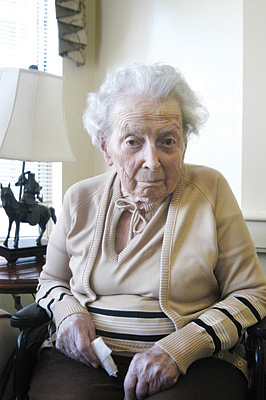 What is the secret to living long and well? "Be stubborn," Saklad says stubbornness is what drove her to disregard her mother's advice and enroll at the Women's College at Brown, as it was then known. Stubbornness is also what enabled her to go on to medical school at Johns Hopkins and then to return to Rhode Island to become one of the few female psychiatrists then practicing in the state.

"My mother said, 'I don't know why you have to do all these strange things. You can find a nice guy, get married, and have a family,'" Saklad recalls. "I always had my own ideas about what I was going to do."

Today, Saklad lives in a nursing home in Providence. She gets around in a wheelchair and needs constant care from a health aide. Her voice is weak, and she has a strong sense of her own mortality. "I'm just biding my time right now," she says.

But she still reads the New York Times and the Providence Journal every day. And, although her short-term memory can be spotty, she remembers perfectly events and people from decades ago. In a recent conversation she couldn't pull up the name of the Times columnist she likes most, for example—Maureen Dowd—but easily recalled the last name of her mathematics professor at Brown—Archibald. Saklad knew the year she was married—1939—but not the year her husband died.

"Certain things are important to me," she explains. "They're easier to remember."

Saklad decided to become a doctor when she was a child. "I was in a hospital with a knee injury when I was ten," she recalls. "When I complained to the nurse, she told me, 'You're just trying to get attention.'"

"When I grow up." Saklad replied, "I won't be a nurse. I'll be a doctor and believe my patients." She says there was no dissuading her after this.

Saklad's father died when she was fifteen, and her housewife mother couldn't afford to put her daughter through college. According to Saklad's son, Mark, Brown gave his mother a scholarship, but the money covered only three years, and Saklad had to take seven classes e 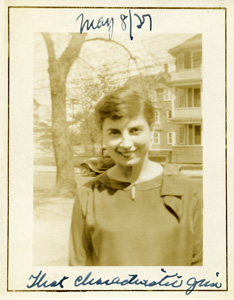 ach semester so she could graduate.

Saklad wouldn't have been able to afford medical school either, but the dean of the Women's College had two Quaker friends who were looking to help more women become doctors. The friends gave her $1,000 a year to attend the Johns Hopkins medical school in Baltimore. After getting her MD, Saklad came back to Providence, where she went into private practice.

Mark Saklad says his mother never complained about being one of the few women in her field. "Her attitude was, 'I'm a doctor, and I do doctoring. That's it,'" he says. Saklad's husband, Elihu, served as chief of anesthesiology at Rhode Island Hospital.

In January, about thirty of Saklad's closest friends and relatives gathered at the nursing home to celebrate her 100th birthday. They ordered a chocolate mousse cake and gathered around her as she tried to blow out the single candle on top. It took some help. How did it feel to be 100?

"No different than when I was ninety-nine," Saklad says.

Reader Responses to One of Our Oldest Living Alums Tells All